An interview by James

Mr. Shinji Hattori is the CEO & President of the Seiko Watch Company, but more importantly he holds the same positions in the parent company, Seiko Holdings, of which Seiko Watch Company is but a small part. He is also the great grandson of Kintaro Hattori, founder of the firm. It was apposite that our meeting was not held in the modern Seiko building but rather on the top floor of the WAKO store on one of the busiest corners of Tokyo’s famed Ginza. These were Kintaro Hattori’s offices in the 1920s & 30s & Mr. Hattori loves being there. 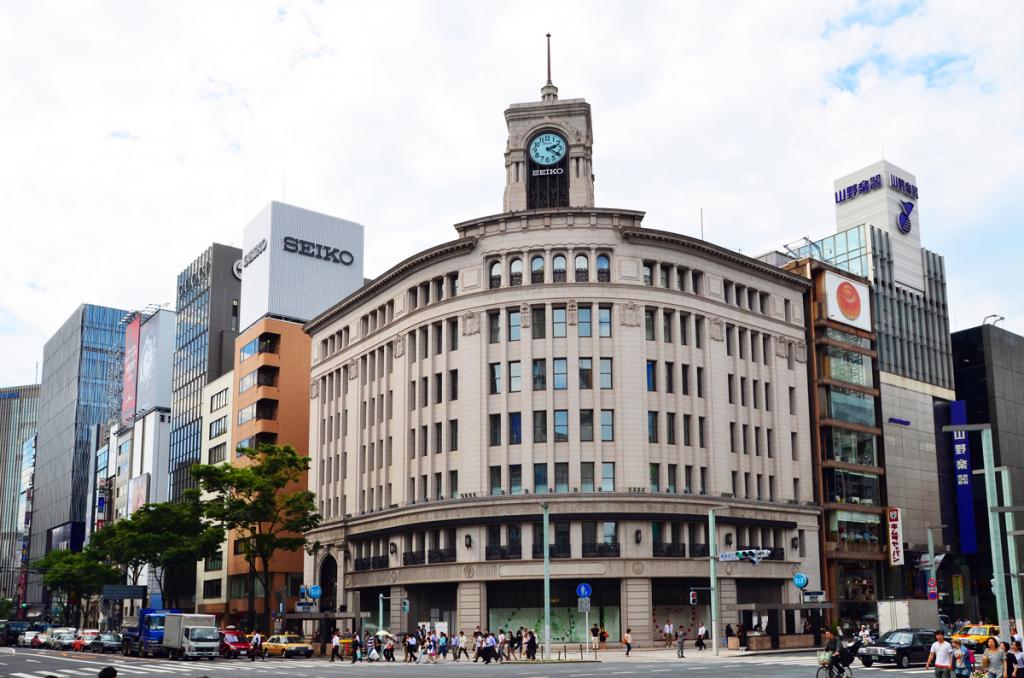 Our meeting began by me reminding him that this was his tenth year of being in charge of Seiko Watch Company and it was one of the rare occasions about which Seiko had not issued a commemorative watch.

James Dowling (JD): Can you tell me how you split your time between Seiko Watch Company & Seiko Holdings?

JD: Wow, as much as that; so the watch side must be really important to you. After all it is the family history. So, how important do you think it has been for Seiko Watch Company to have a member of the Hattori family in charge; because for many years it was run by managers, wasn’t it?

SH: I think that the great advantage is that I can consider business in a long term basis; also we make watches that customers will keep for a long time, 30 years or maybe more. So I like to think about the expectations of these customers when I make decisions. Also I think it is important for me (as a Hattori) to appear to the public as President, because of the long family tradition; it might just seem like advertising but I hope that customers will have confidence in the brand because of the long family tradition.

JD: In the ten years that you have been running Seiko Watch Company, what is the thing of which you are most proud?

SH: The Seiko Astron GPS Solar watch; seven years ago, I asked our R&D department if they could develop such a watch; because about 15 years ago the people at Epson began to research how to use GPS in a watch and the new watch is the result of all this research.

JD: While you have been in charge, the biggest change I have seen (as someone looking at Seiko from overseas) has been the internationalization of your high end products. Now, watches which were only available on the Japanese domestic market are now available worldwide; starting with the Spring Drive and then the Grand Seiko. How is this strategy working for Seiko?

SH: I am pleased with the results, so far, we have successfully launched the Global Collection, first with Grand Seiko in 2010 and then with Astron GPS Solar in 2012, they are the core of our prestige collection and it is here that we can offer watches which are truly unique with our new technology. Credor, whilst it is very popular in Japan is now also sold in some Asian countries and in our boutiques; for example in NYC & Paris.

JD: Oh, Credor is sold in NYC & Paris. I didn’t realize that.

SH: In very small quantities; but our current focus in the prestige & luxury watch area is the Grand Seiko and the Astron GPS Solar, it is interesting to see how the sales of Grand Seiko have increased since 2010, when we launched it internationally. Our sales world wide in Grand Seiko have achieved double digit growth every year, we now have an excellent retail presence and many more international retailers are asking for the brand; in Europe, for example we have about 30 retail partners and strong sales by our boutiques in Paris, Madrid & Amsterdam; I have strong confidence in Grand Seiko’s potential for the future in the international market.

[At this point Mr. Hattori said nothing, but smiled inwardly with a satisfied look.]

JD: And with that snippet of exclusive news, I would like to thank you for your time & for your very interesting answers. 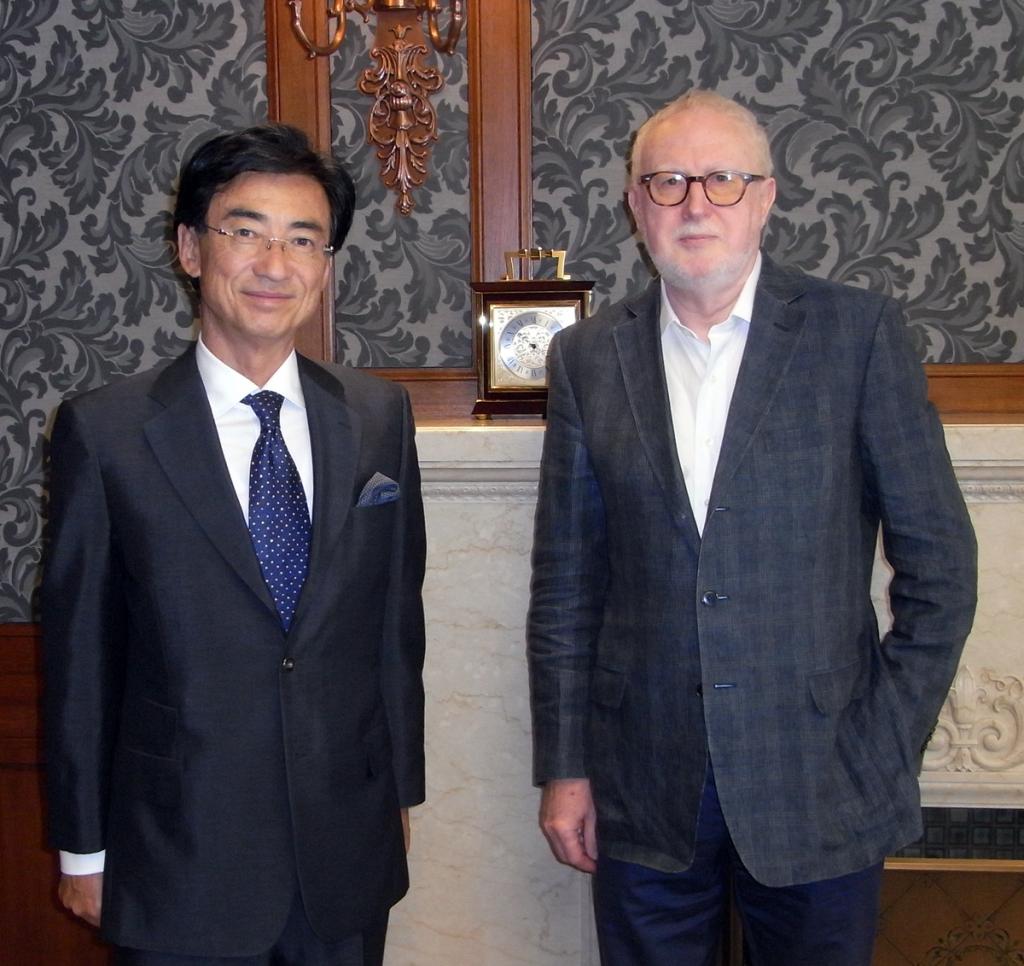 Then it was suggested that Mr. Hattori & I pose for a photograph, we stood next to the fireplace & I noticed that the clock on the mantel was not signed ‘Seiko’; rather it was signed ‘Wako’; and once Mr. Hattori & I had said our goodbyes, it was planned that we would go down the elevator to the Wako store itself. 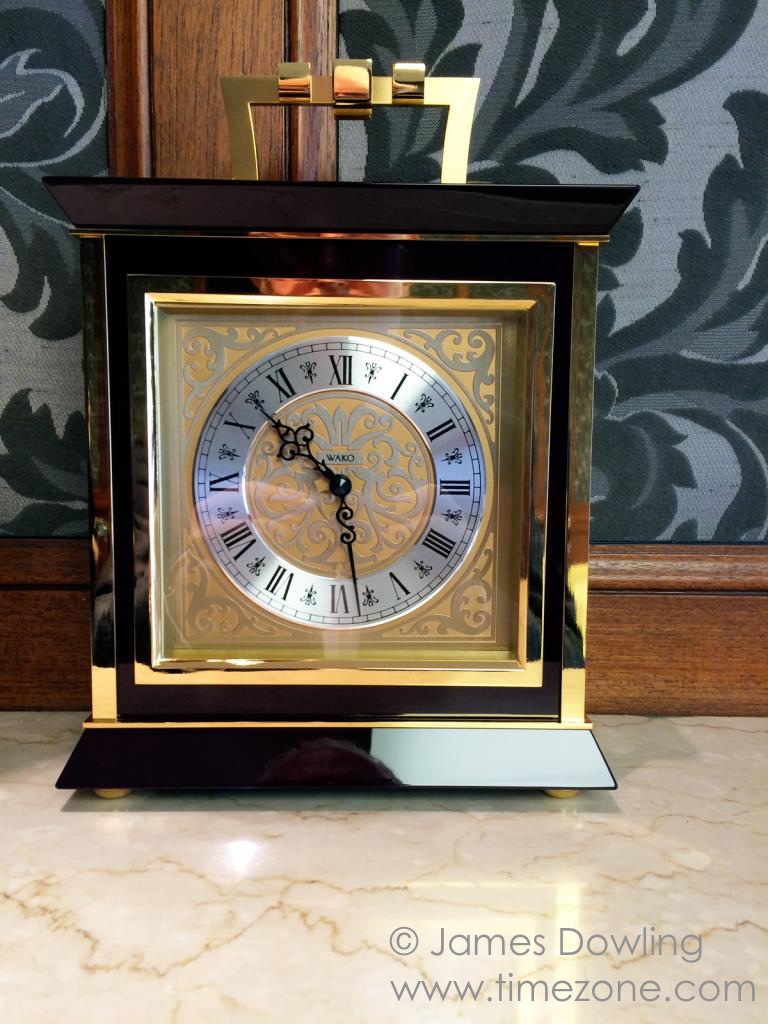 However, before that visit, it was suggested that, as the weather was good, we might go up to the roof of the building for a group photograph. So instead of going down, we went up the stairs, through some imposing metal doors and out on to the roof of the store. If you look at the Seiko supplied image at the top of this piece you will see that the building next to the store bears a large Seiko logo (it is atop the WAKO extension) but now it bears a sign for the firm’s flagship watch. 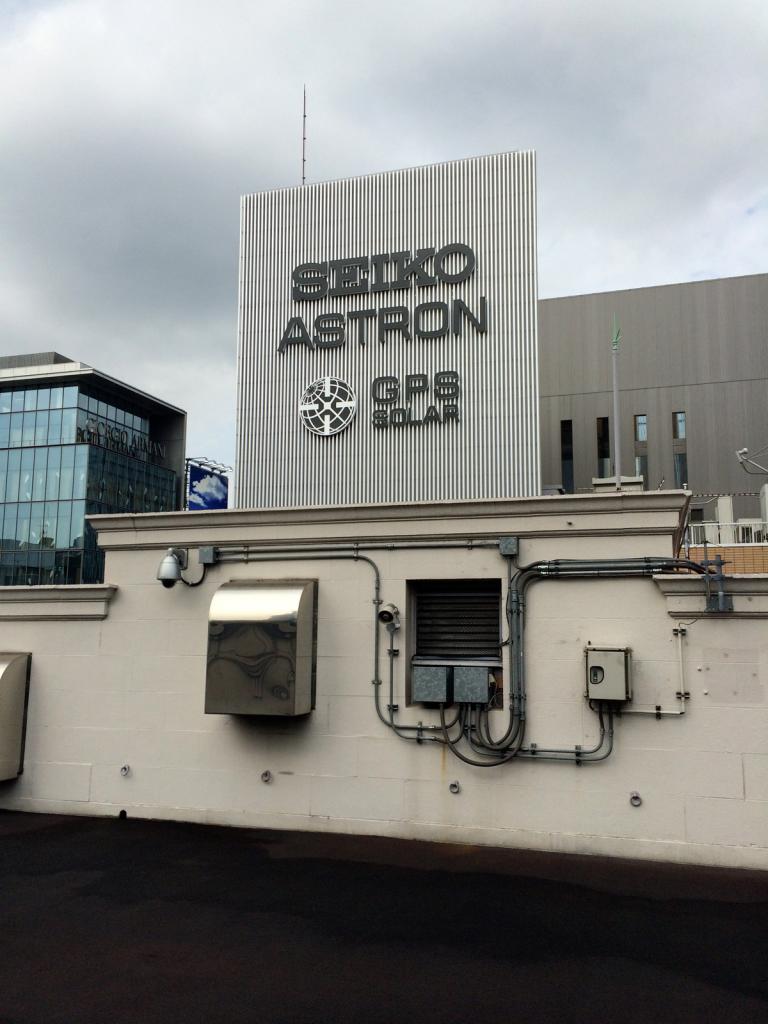 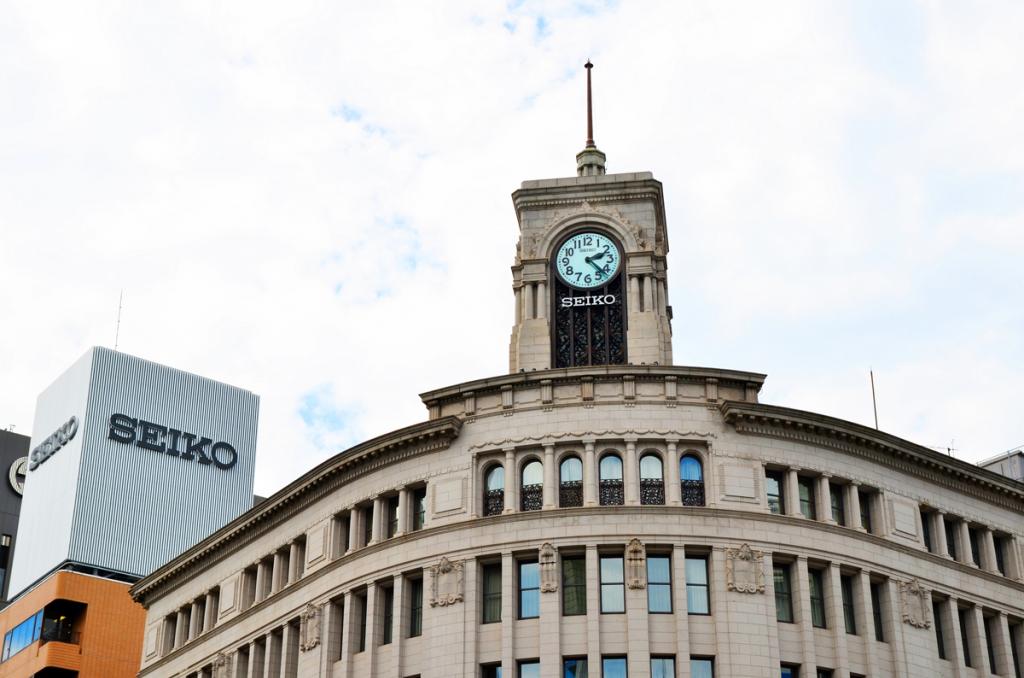 The WAKO roof is crowned by the giant Seiko clock 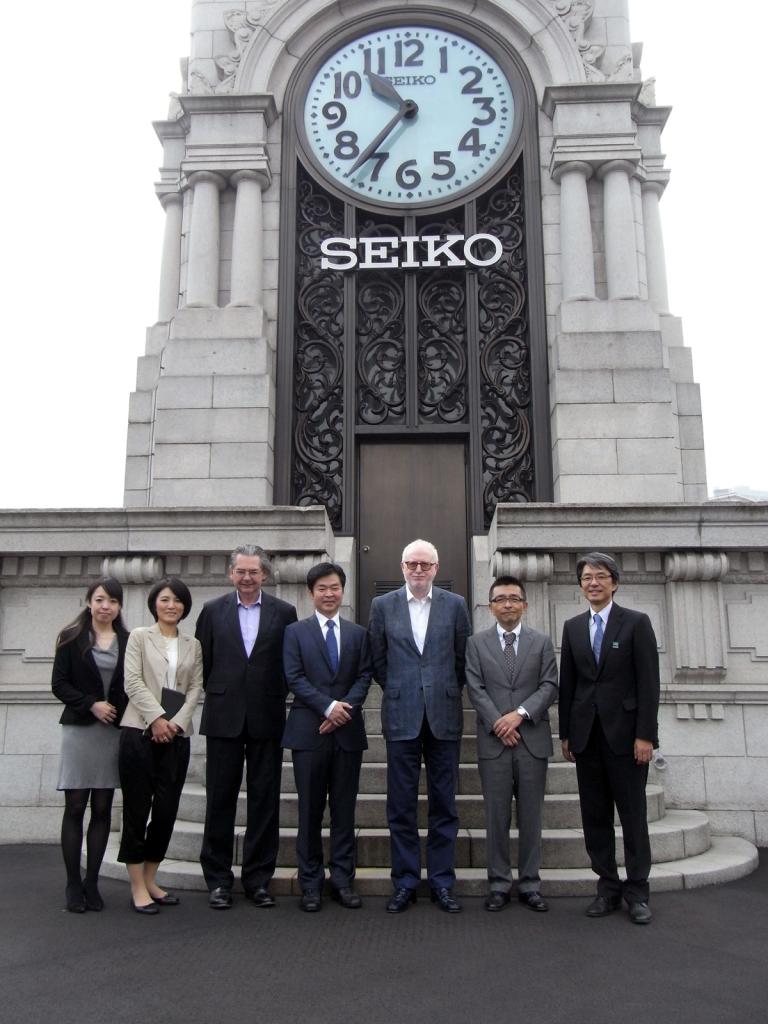 Then it was suggested that I ascend the stairs alone for a solo photograph. 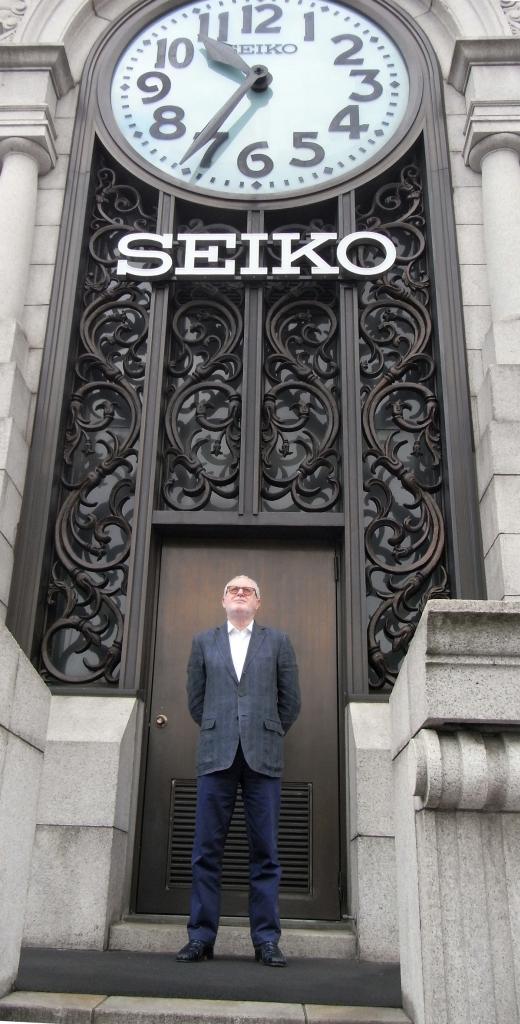 Then it was back down the stairs, and as we descended I noticed the improvements made to the building after recent earthquakes. These are the supports for the clock tower, which also monitor any movement at all in the structure. 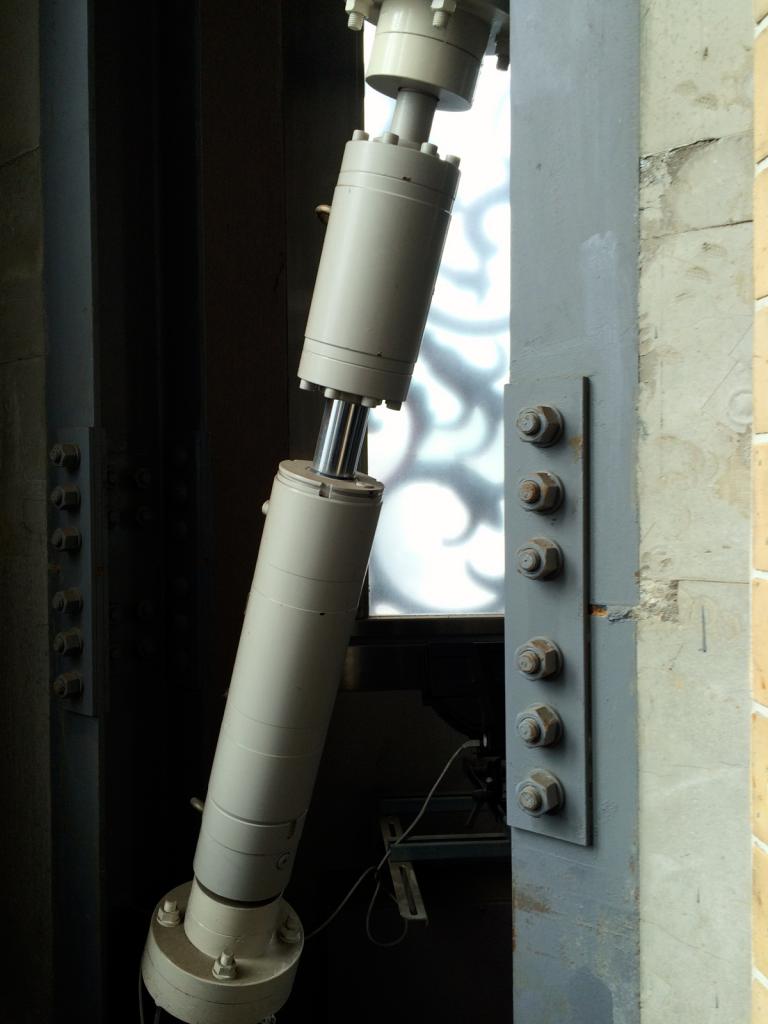 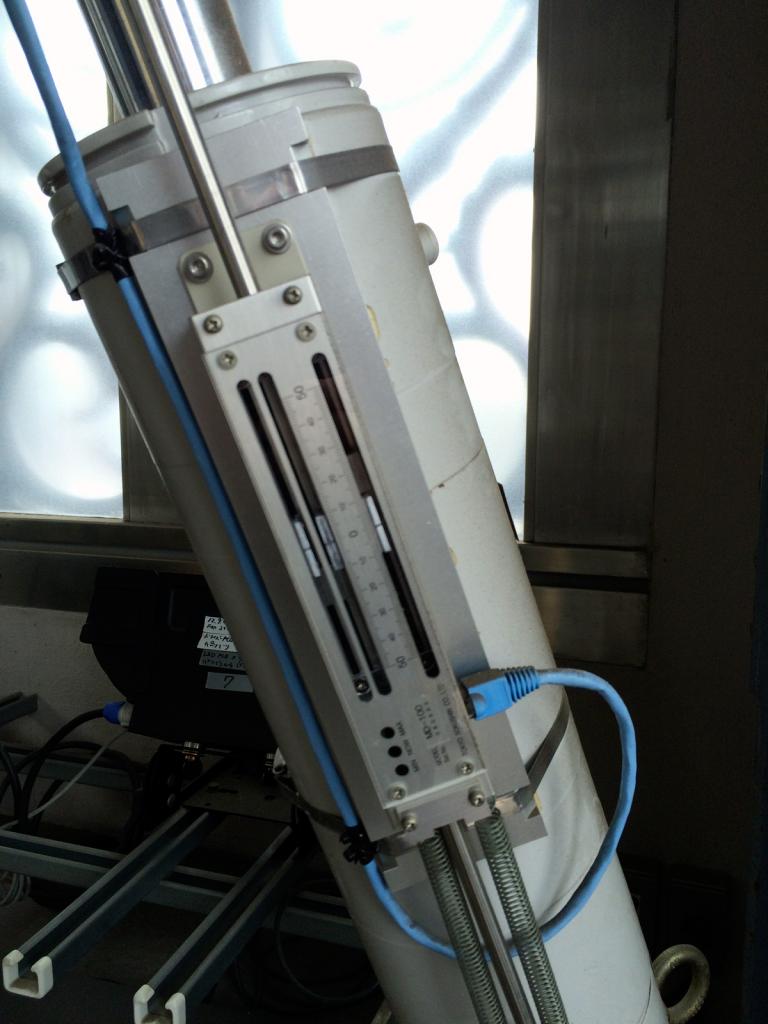 Then it was back in the elevator to visit WAKO. “Wako” is not some ancient Japanese word signifying the impermanence of time, or some such. Rather, it is a construct of the words ‘Watch COmpany’. It was Kintaro Hattori’s first retail store and is essentially the Japanese Tiffany & Co; it sells a wide range of watch brands from Rolex to Vacheron, and, of course a range of the more expensive Seiko brands; as well as fine china and silverware. I have a strong feeling that if the Japanese do wedding lists; Wako gets a lot of that business. 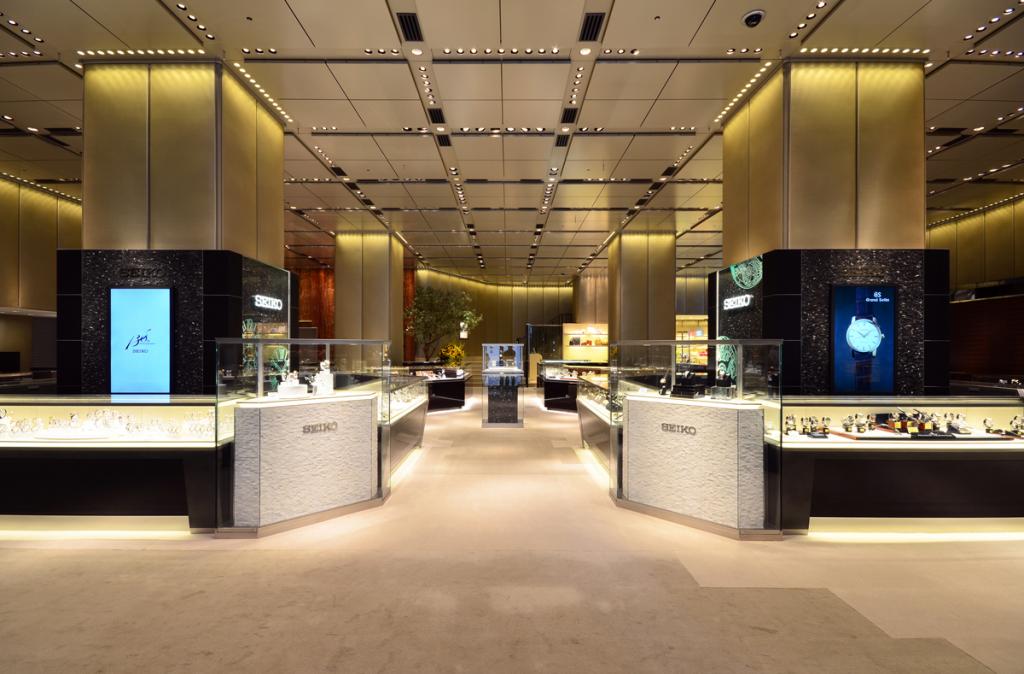 What was great about Wako was that they had all of the Grand Seiko & Credor range, including the Iichi II, which I had seen being assembled the previous day. This allowed me to take even more photos of this stunning piece. 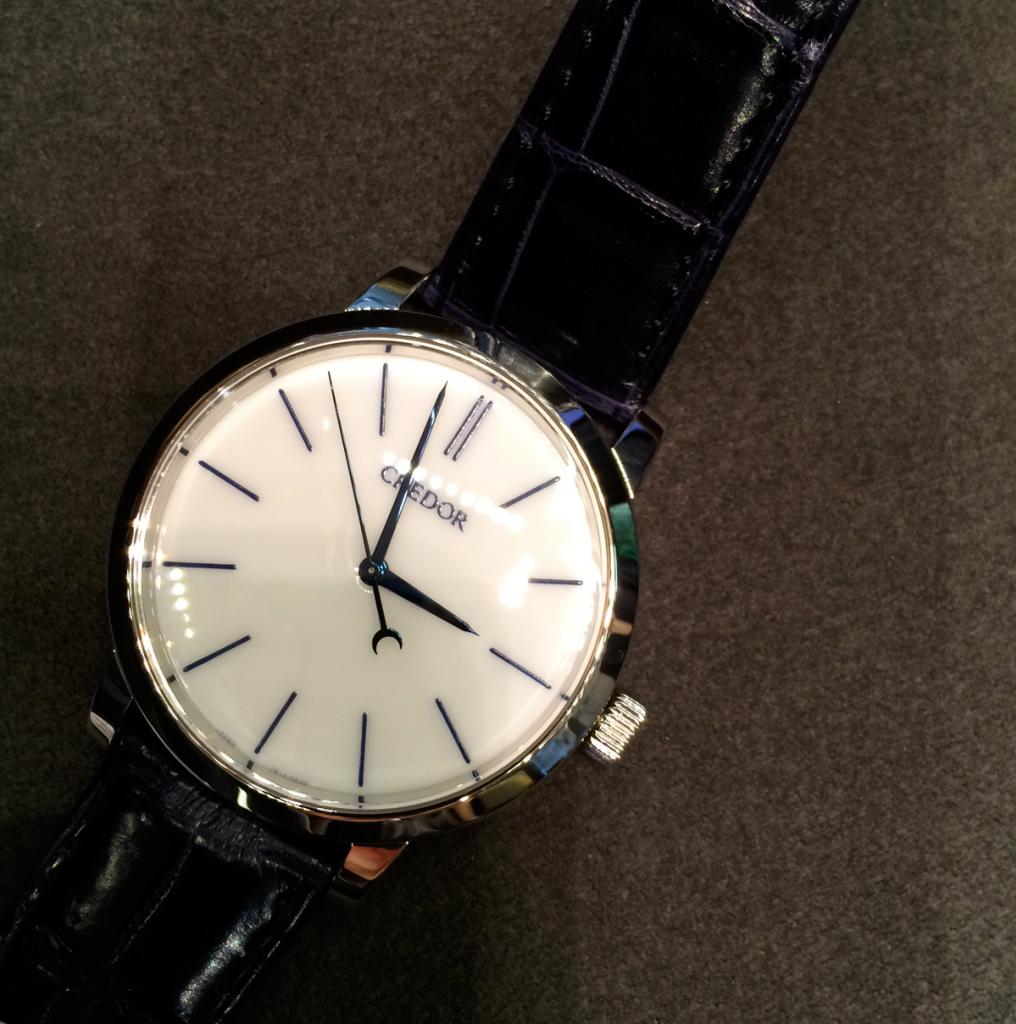 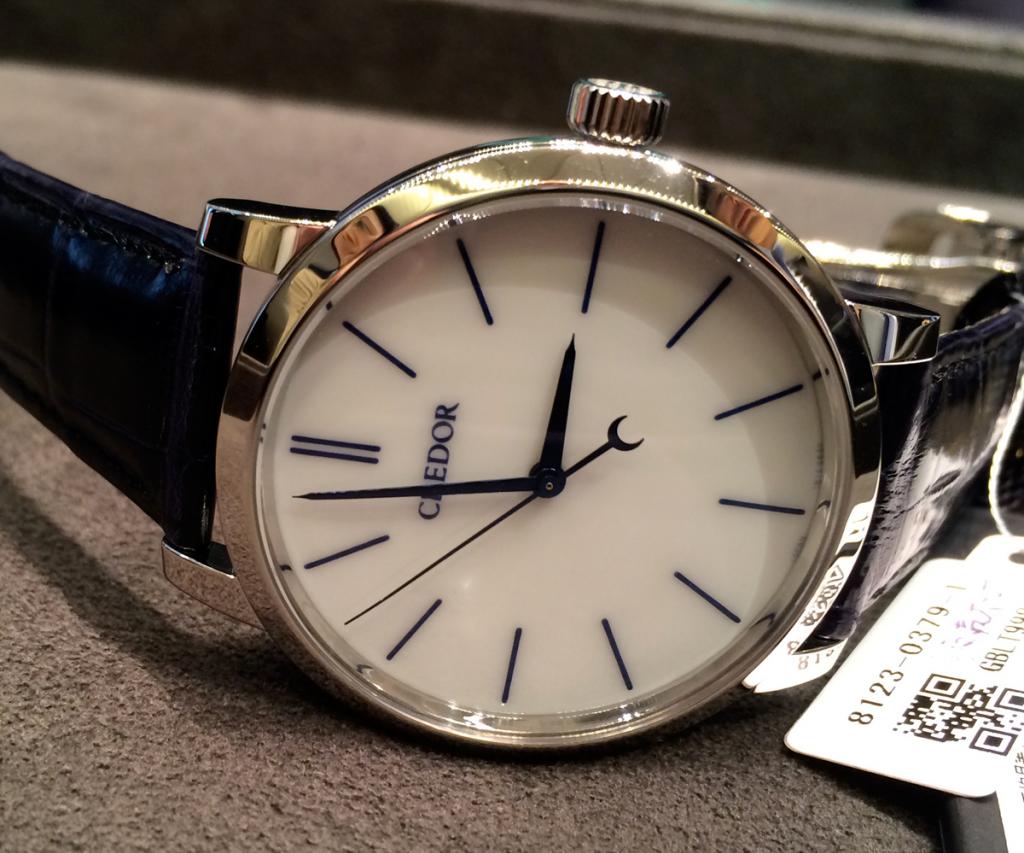 Then it was back in a cab for the ride across town to the Seiko museum; since I last visited the place it has been completely reorganized and now makes a lot more sense. You start with a history of Japanese timekeeping, which is very different from the conventional system we all use nowadays. Instead of a 24 hour day, the Japanese used to use a 12 hour day; but not 12 equal hours, rather the day was then broken down into 6 ‘hours’ of daylight and 6 ‘hours’ of night time. Meaning that, as the seasons changed, the daytime hours got longer & the night time hours became shorter. This meant that not only were Japanese clocks much more complicated than Western ones, they were almost impossible to mass produce. 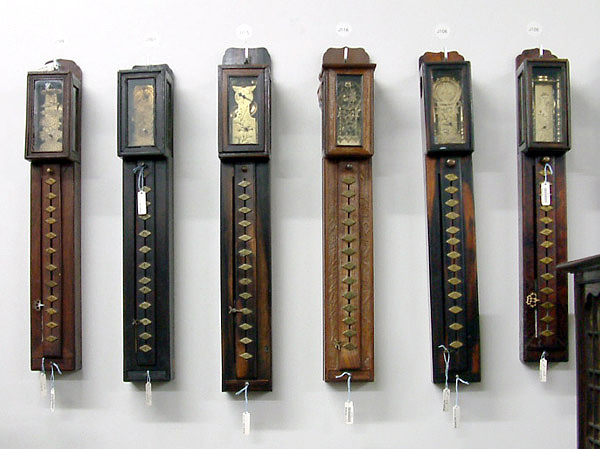 But, in 1872, the Meiji restoration abolished the Japanese temporal hour system & introduced the western system as part of Japan’s rush to modernize itself. This not only simplified the construction of clocks in Japan but also opened the possibility of mass production of timepieces. It was only 20 years after this change; Kintaro Hattori opened the Seikosha watch factory and began to produce wall clocks. 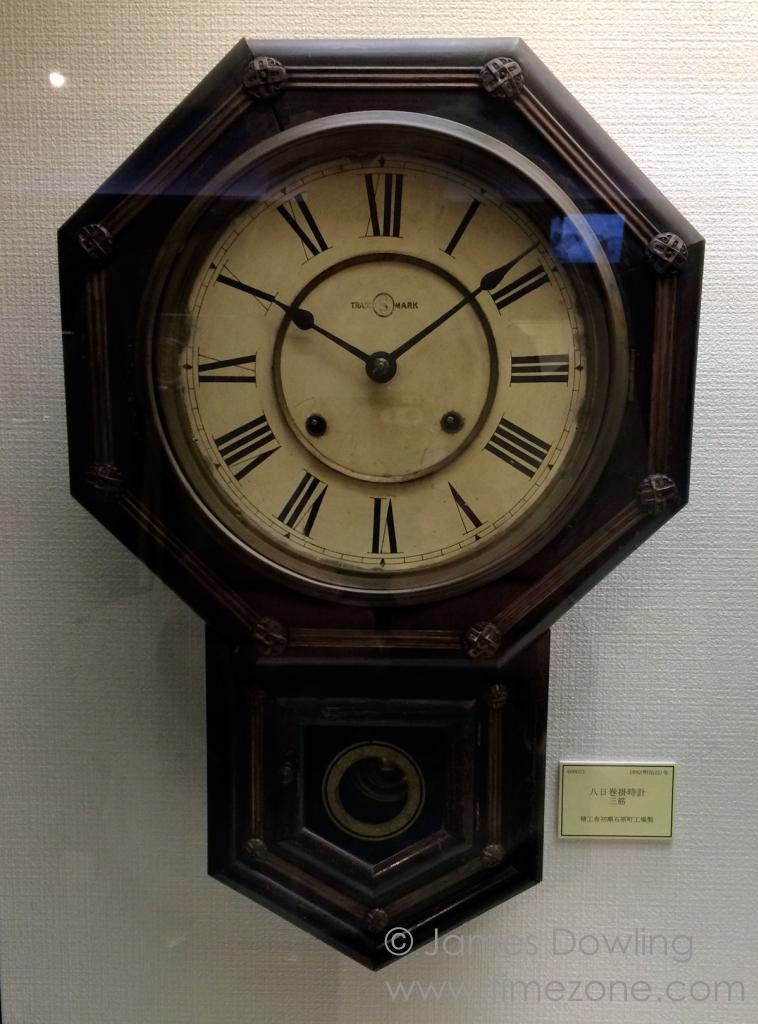 This is a clock produced within the first year of operation of the factory and is the world’s oldest known Seiko product.

The next section of the museum shows the progress of Seiko as a company, starting with some of their early pocket watches; within 3 years of producing his first clocks, Hattori-san was making pocket watches, like this one from the first production run. 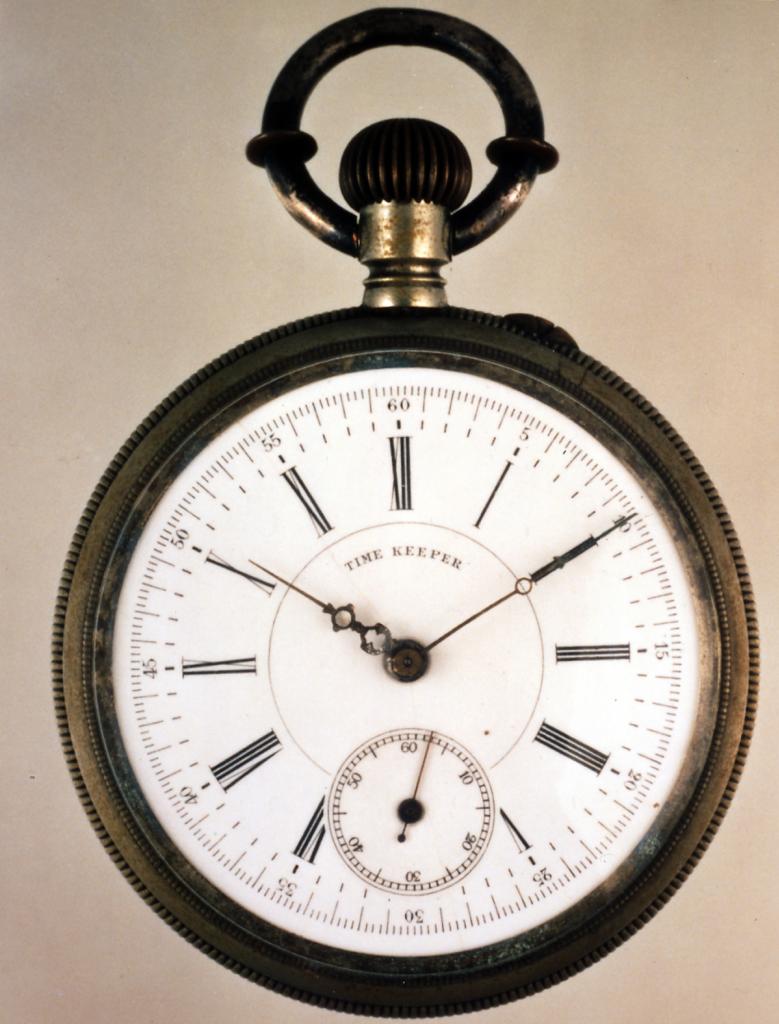 And by 1913, the firm was making wristwatches, the Laurel was their first model. 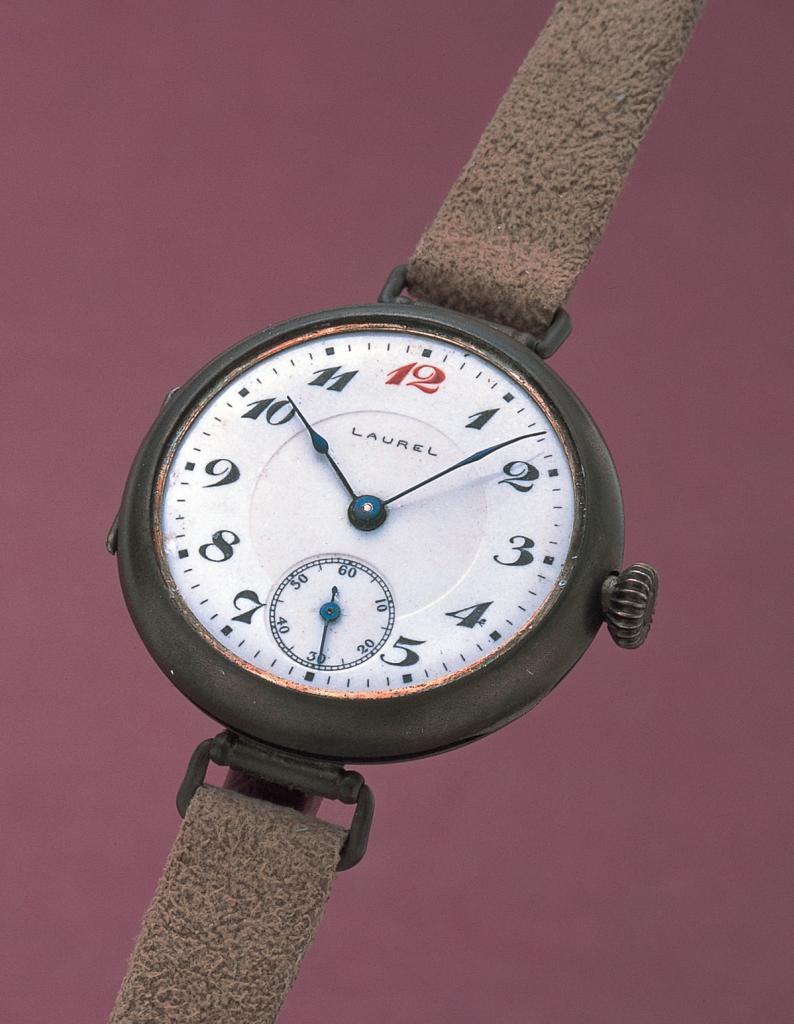 The first product the company ever exported, was this alarm clock, which was sold in both Europe & the Americas. 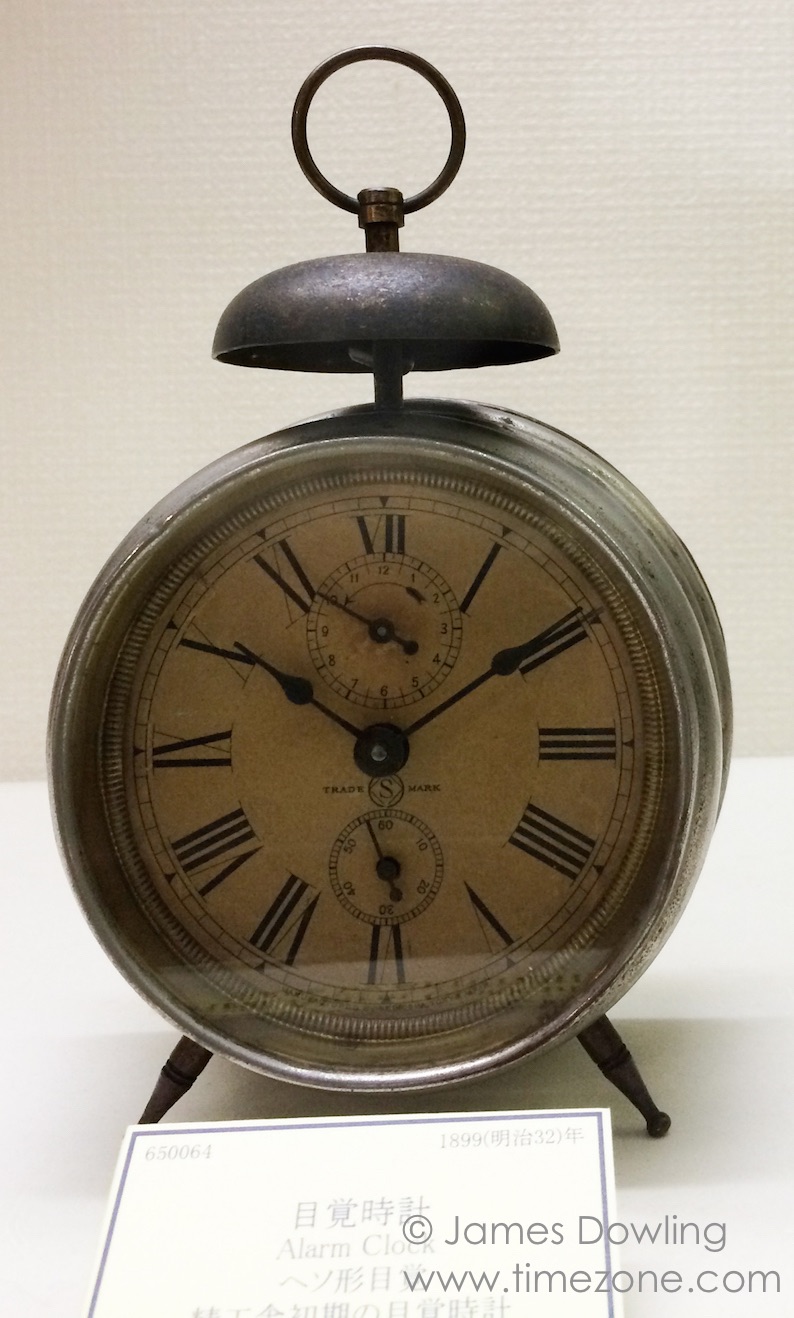 The observant amongst you will have noticed that all the previous timepieces are essentially direct copies of contemporary western timepieces; as was common throughout Japan industry at the time.

Being a weird sort of fellow, my favourite exhibit in the museum is this Daliesque sculpture. 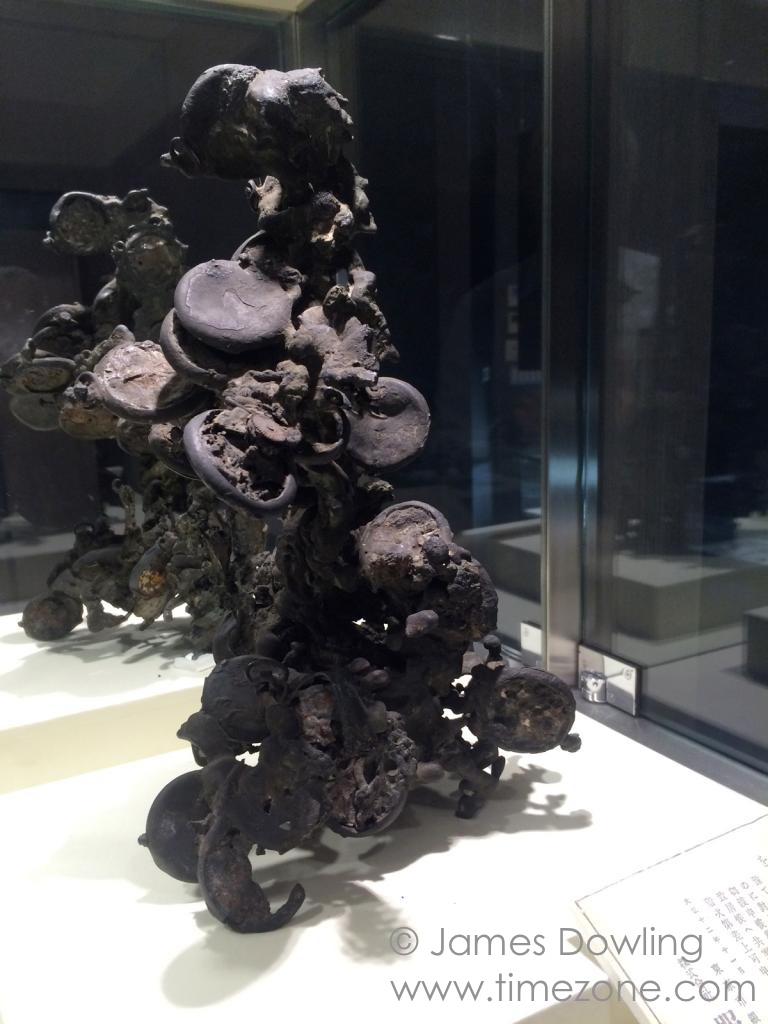 Actually, it isn’t a sculpture, it is what remains of many watches after a terrible fire in the 1920s burned down Seikosha’s repair facility. Hattori-san took this tragedy and turned it into a marketing success. He took out advertisements in all the newspapers telling clients who had brought in watches for repair to come to the store, show him their repair ticket and Seiko would give them a brand new watch; thereby converting many people, who had brought in other makes for servicing, into Seiko owners.

The museum is full of wonderful snippets of knowledge for the Seiko enthusiast; for example, did you know that the first ever commercial broadcast on Japanese TV when it launched in 1953 was for Seikosha clocks?

We all know that the Grand Seiko was launched in 1960, and we all know what the first ones looked like. 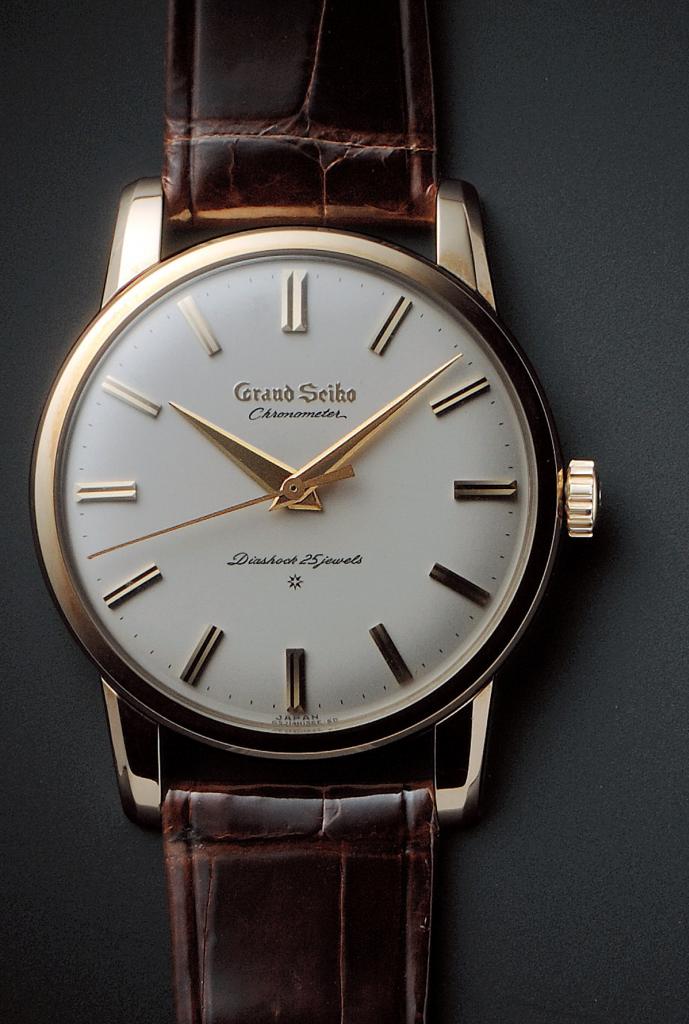 But how many of us have ever seen the proposals for the logo style for the Grand Seiko? 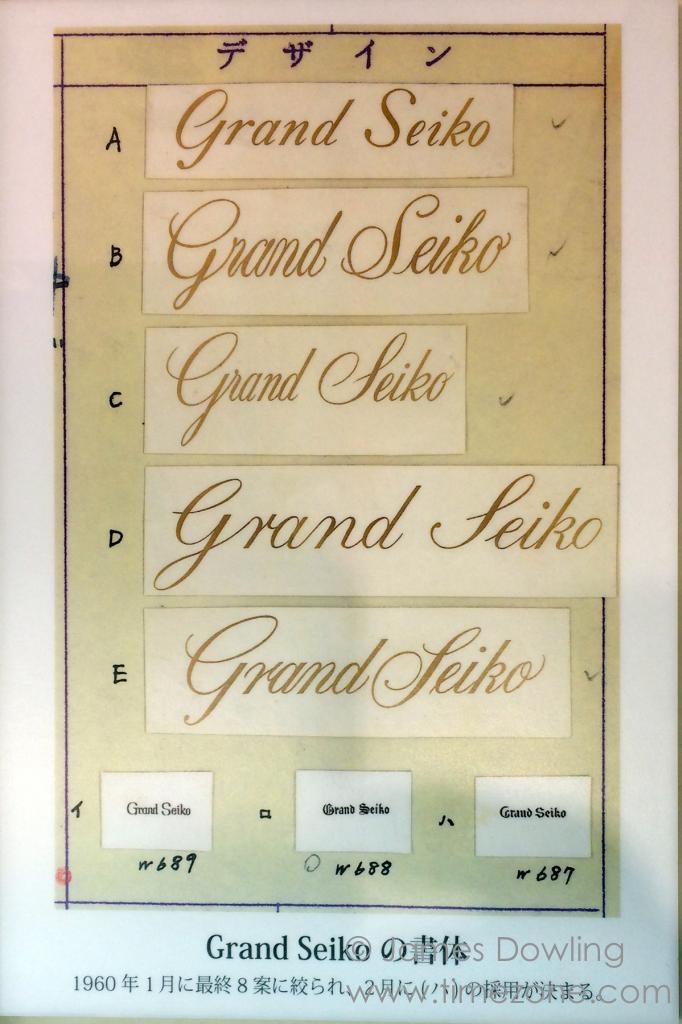 I loved the display of the different timers that Seiko made for the 1964 Tokyo Olympics. 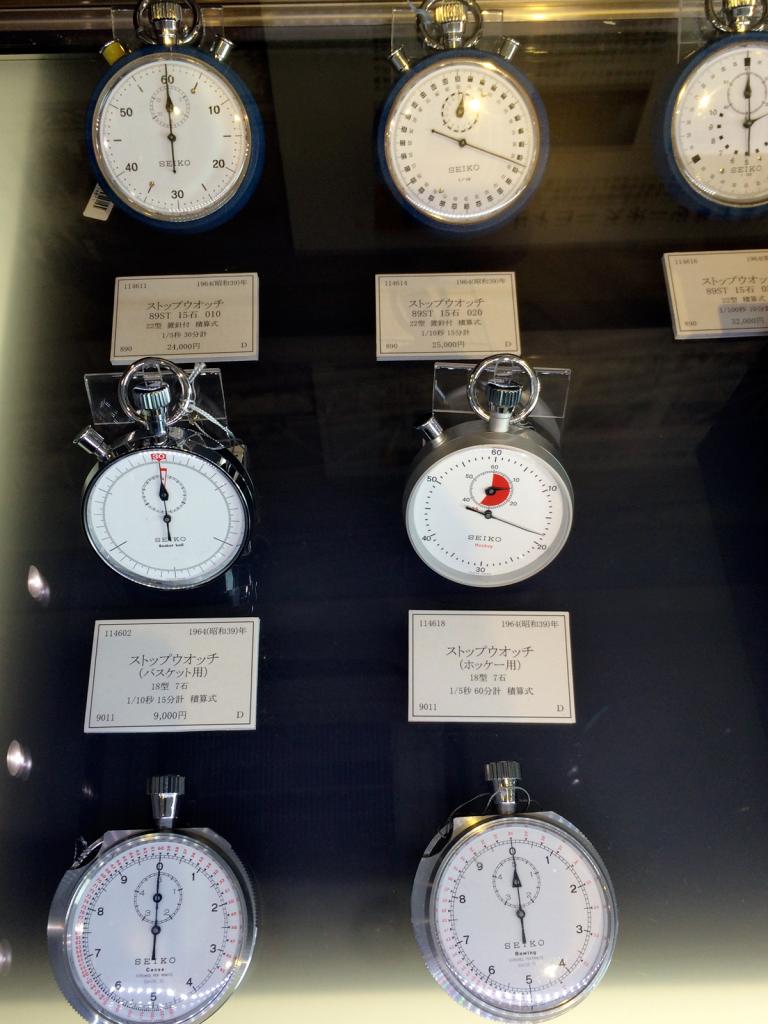 Seiko built & provided almost 1,300 timing devices, including the world’s first quartz sports timers, for those Olympics; for me the most memorable statistic though is the fact that it was the first post war Olympics free from timing disputes, so accurate were Seiko’s timers.

Seiko are so proud of their continuing role in sports timing that a large section of the ground floor of the museum is given over to it and this section is very ‘hands on’ & interactive. 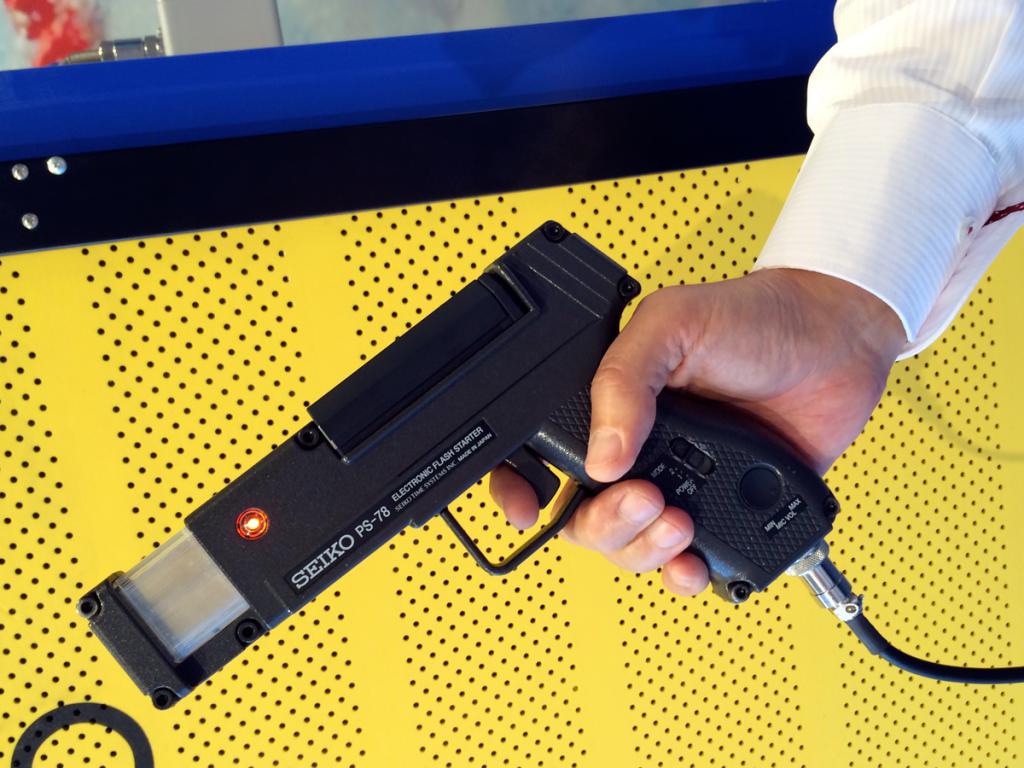 Here you can play with starting ‘guns’, sprint blocks which can detect a false start and all other sorts of split seconds timers.

Now, back on the ground floor, it was time for me to take my leave of the museum & the nice folks at Seiko; but, as is their wont, there was still time for a farewell group photograph in the lobby of the museum. 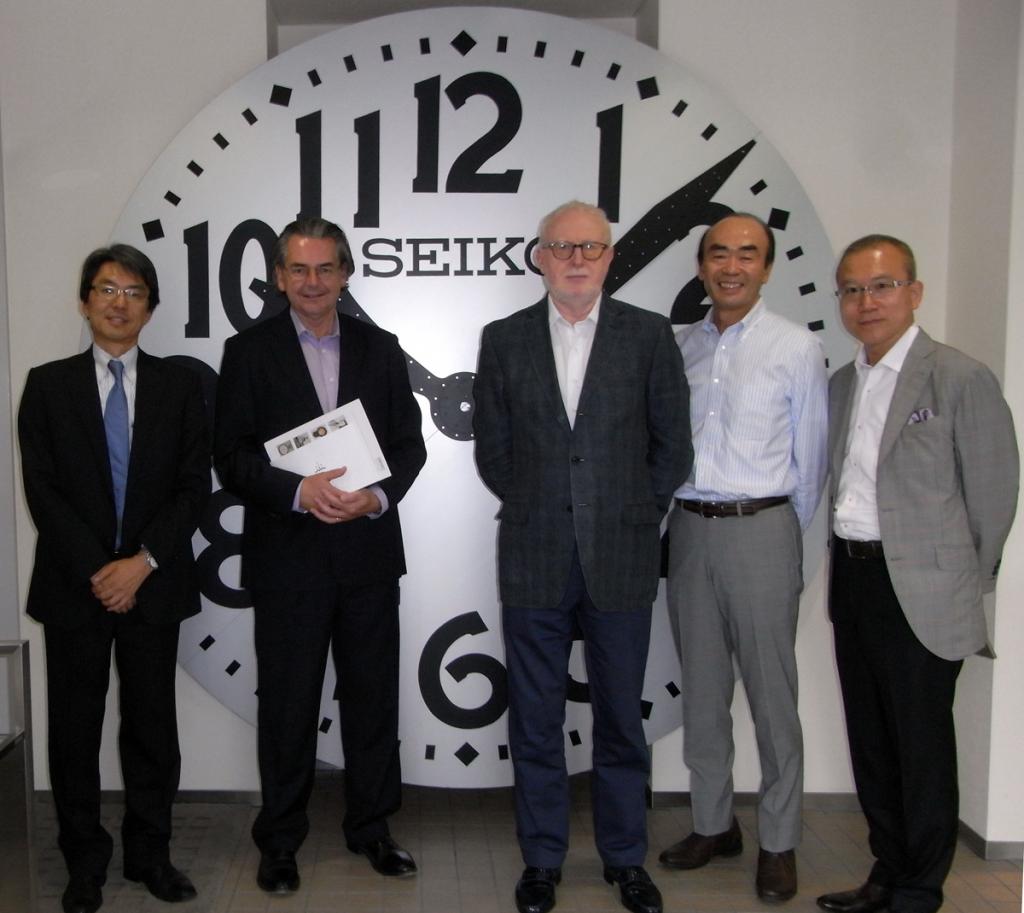 If you are ever planning to be in Tokyo, I can thoroughly recommend spending a couple of hours at the museum, admission is free and it is open from 10:00 to 16:00 each day except Mondays & Japanese National Holidays.