With Breitling’s Thierry Prissert and the Cockpit B50

The speed-loving President on the Cockpit B50, Emergency II-Plus & why the Apple Watch is good for Switzerland

At just 45 years of age, the Paris-born tastemaker took the reigns in 2010, following a remarkable career in luxury, fashion, and high-end retail at Folli Follie and luxury swimwear brand Vilebrequen. In the past four years, Prissert has expanded Breitling’s North American enterprise on an impressive global level.

In a freewheeling conversation, Prissert shared his thoughts on Breitling’s most hotly anticipated models and the future of the brand—along with watchmaking’s fate in the era of wearable tech.

How have the races treated you so far?

My eyes have never been bigger! On our drive this morning, I got the sense that you have a need for speed. Do you fly planes like Vice President Jean-Paul Girardin?

No, I’m not a pilot, but I have always been attracted by speed, and the only thing you can do when you’re not a pilot is driving. So I enjoy driving, but the world of aviation can be exhilarating even as an observer—even more if you’ve had a chance to be in a plane with an amazing pilot showing you speed and tricks. David Martin, our aerobatic Breitling pilot, is pretty unbelievable. 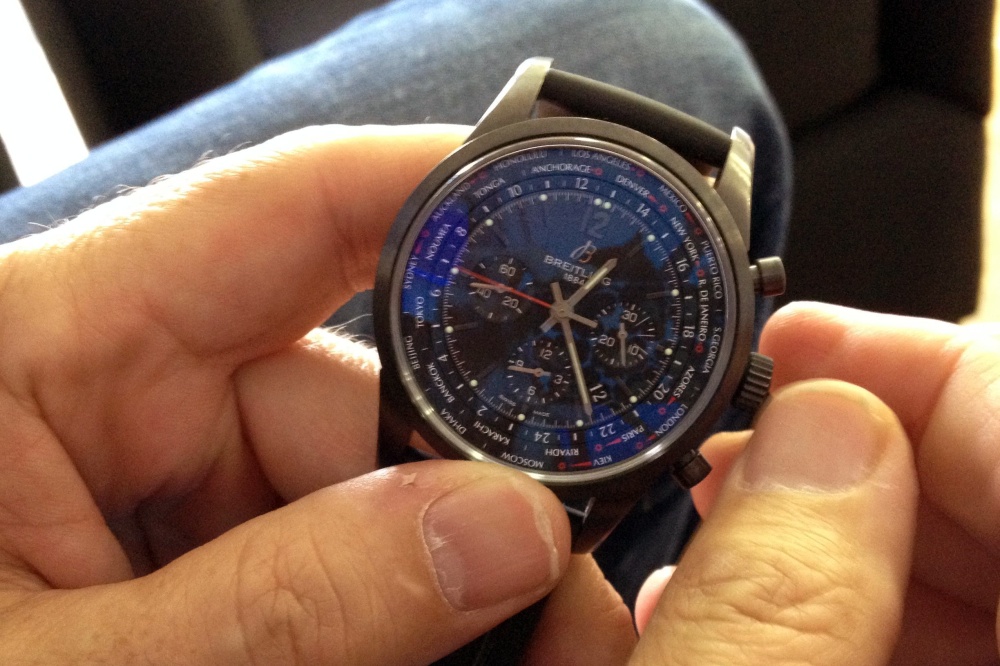 Tell me about Breitling’s partnership with Bentley. I loved seeing the Breitling for Bentley pieces at Basel this year.

We celebrated last year the tenth anniversary of our partnership. Bentley has a very long racing history. In the first part of the twentieth century, the brand had a great race team and race car. They wanted to work with us when they were willing to start racing again at Le Mans. We said, we’re in the world of aviation, but speed and precision is important to us, too. We sponsored the car and in the second year, they won the race! We decided to collaborate on a collection every year.

There’s a lot of similarity between us. Dedication to performance, elegance, design, speed, comfort. What I love about a Bentley car is that it’s a mix of sportiness and agility, but also comfort and luxury. I think our watches are a little bit like this too. We’re different from the rest of the luxury watch industry, with a watch that is for adventurous people, a little more sporty at times, a little more outdoorish, that’s also an instrument of precision.

We had an amazing chance to take some of our clients last year to visit the Bentley factory in England, and it’s unbelievable some of the similarities that you would see in a luxury car manufacture like that and our manufacture in La Chaux-de-Fonds. I always say, it’s great to take a consumer to see how we make our watches. You know, they run 24 hours a day using 350 components—seeing the technology and technicality behind that changes your perspective. The same to see all the work that goes into a high-end car like a Bentley.

Since we’re talking about in-house movements and what goes into them, which movement in 2014 are you most excited about?

As you know, on Thursday we announced the Cockpit B50 here in Reno. Not a lot of companies in the Swiss watch industry can say that in five years, they’ve launched an in-house mechanical movement {2009: Caliber 01, a self-winding chronograph movement} as well as an in-house quartz movement {2014: Caliber B50, a SuperQuartz movement, 10 times more accurate than standard quartz}. It’s great to have a digital watch that’s certified by the Swiss Official Chronometer Testing Institute (COSC). I’m very proud of Jean-Paul and his team—they’ve designed a watch to show pilots we have their needs in mind.

It’s great to see a pilot like Mark Kelly wear the watch because—as he says—when he’s in the cockpit, it’s tough to see a watch dial, so you have to stop what you’re doing to see the time. Now, with the Cockpit B50, you just tilt your wrist and you illuminate the watch instantly to read the time in every condition, in every environment, at 3,000 feet.

But the B50 is also perfect for non-pilots like me. You can recharge it yourself with a cable and the dual time zone is also great for me. I go a lot to California or the Midwest or Denver or Switzerland, traveling through several time zones. For me, I picture myself with the Cockpit B50 being able, with a touch of the crown, to change my second time zone to my first time zone. Today, I ended up doing this with a mechanical chronograph by hand, and it was simple. But it will be cool to instantly switch it.

Your Thursday announcement of a quartz watch with a lot of—some might say “smart”—functionality was fantastic. Of course, there was another big watch announcement this week. How do you think the Apple Watch is going to impact the industry going forward?

I’m so happy you asked that question. I do think Apple and Breitling are in two different worlds. For younger people, a $350 or $400 watch is still expensive, and you have to have your phone on you to use it. But we’re going to have millions of kids all over the world—before they can afford a so-called “real” timepiece—who will wear a smartwatch.

It’s very positive. I’m happy that the younger generation is going to learn how cool and nice it is to feel a watch on the wrist.

And not just check the time on their phone.

Yeah! I hope that they will soon aspire to have a Swiss watch, hopefully a Breitling. Of course, we’re selling beautiful timepieces that are very precise instruments. But it’s also something you got from your family; you’re proud of showing it off; maybe you received it as a gift or you bought it for yourself because you’ve been successful in your job.

Personally, before I was in the watch industry I always had Swiss watches, and I was happy in the morning to open my little box and choose between two or three to wear. Is it going to look good today in my work environment? Will I be in a fun environment on the weekend? I think the Apple Watch is a different tool; it gives you time but mostly allows you to connect to the phone in your pocket. We’re selling a little more to our clients when we put a timepiece on their wrist.

It’s like when people ask me the question, “Do you think checking the time on your phone or iPad is a problem?” I say, I have an iPad, I have an iPhone, I read the time sometimes on my phone, or in the morning, I look at the clock because I don’t sleep with my watch. But the first thing I want to do when I get dressed is put a Swiss watch on, because I think it looks cool.

Now that you’ve been with Breitling for a few years, do you find that your taste in watches has changed?

It’s changed tremendously. There are a lot of great companies making beautiful watches. But I think when you’re lucky to be from the inside like me, you become a little biased. You discover the way a company treats its employees and clients; how it makes its watches. I’ve discovered the entire world of Breitling and how we make our watches and my tastes have evolved. I always joke that I’ll always be happy to wear my Breitling even if one day I don’t have the chance to work for the brand any longer.

Once you experience the DNA of a brand, you see if it fits you or it doesn’t fit you. I would love to go a plane and ride today, and all of that excitement and thrill is really the Breitling world for me. The speed of the car this morning fits me too. The Breitling world fits me.

We are also privately owned, and long-term, I know there’s one direction, they’re going to service my watch well, and the brand isn’t going to be influenced by the stock market one day. If I were to buy a watch—knowing all this about Breitling—I would feel comfortable with my purchase. (If I like the design, and how the watch looks.) Which, actually, I like how our watches look too.

We always love to discuss technical aspects—it’s important that we offer precise instruments and are working to have all of our watches certified by COSC—but we have to also understand that for the majority of our clients, their main interest in the watch is how it looks. I think the B50, especially the black one, looks so sharp—though some people will like the aluminum. But I’m like any other client. I’m interested in the features, what the watch can help me do and calculate, but I also want it to look sharp! 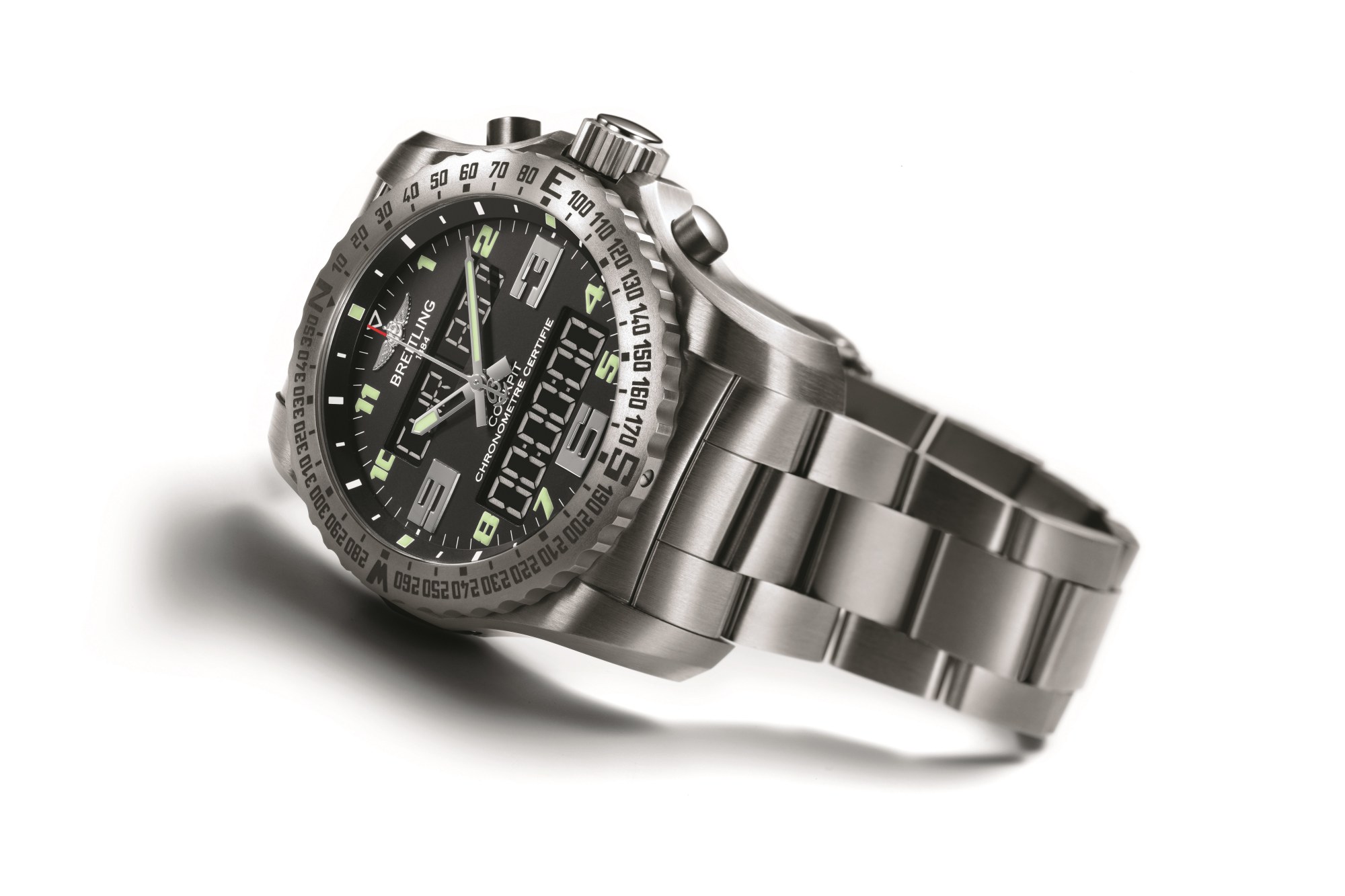 Besides the Cockpit B50, there’s another SuperQuartz watch out there that everyone’s waiting for. What’s going on with the Emergency II?

Our US customers have given us their names, their addresses; they’ve put down deposits (which we never wanted to take in the first place because we don’t know when the watch will be authorized to be sold in the US market). You know, it’s the only watch with a personal locator beacon that communicates with satellites in emergency situations. It’s a life-saving instrument, reassuring for a lot of people who do tremendous, adventurous things—on a boat, on a mountain, in the air. They’ll have that peace of mind that it can communicate to a satellite. It’s just unique.

I know the watch is available in Europe. So what’s the hold up in the US?

It’s not a manufacturing issue, it’s an authorization issue. We’ve gotten the green light from the satellite organization worldwide that says it’s fine, the watch is approved, you can market it. But the rule is, in every single country, they may have additional testing, or additional paperwork. In America, they’ve asked for another step of administrative paperwork and testing. We’ve done all the testing and have the results; now it’s just a question of presenting the paperwork to the Washington, D.C. administration office. And it’s likely going to take a few more months, we think, but we have to comply with each country request. Because of the impact of a potential rescue—the responsibility of having to come get you—in order to buy the watch in a country, you need to be a resident in the country. So you can’t buy the watch in England if you’re an American citizen or resident.

I know we have some anxious customers, but once it’s authorized, they’ll have a watch that will be a life-saving instrument, approved by all the authorities.

Is there anything else exciting coming up for Breitling?

One thing I’m tremendously excited about is in 2015—it’s sad but we have to think ahead. Life goes by too fast! The Breitling Jet Team is coming on an American tour, up to twenty-five air shows across the United States! They’ll share their formation flight of seven L39 planes with millions of people. The “welcome to our world” slogan is going to be very much personified by meeting our pilots, or if you’re really lucky, getting a ride in a plane (because we will try to have passenger flights). A US tour has never happened in the history of Breitling. It’ll be great to show the American people the team in action.

And of course, we’ll have a watch to celebrate the American tour. 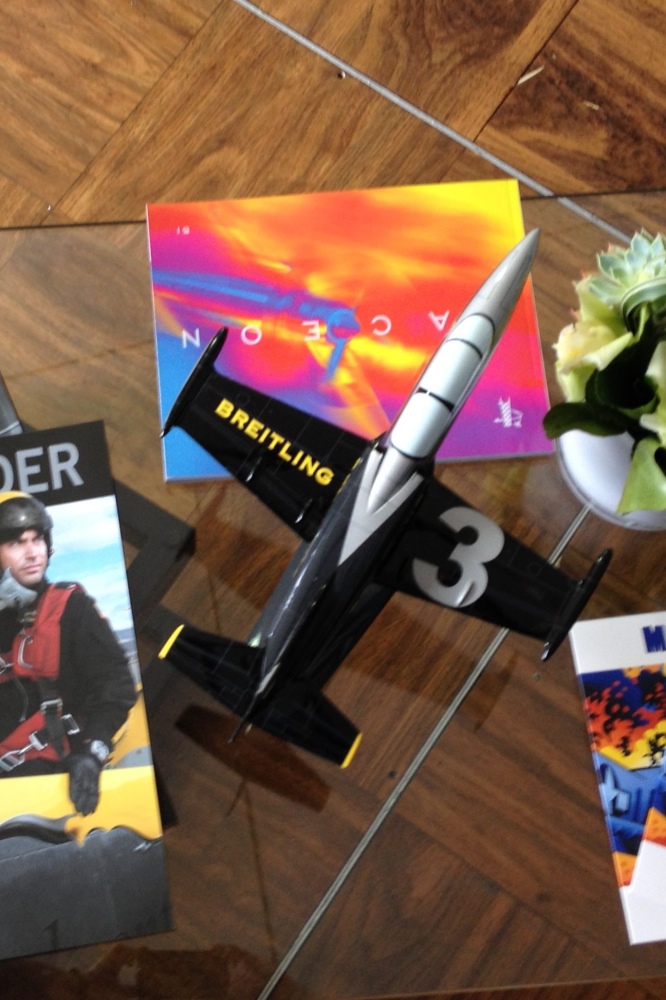 Katie Wudel is the Managing Editor of Our Minutes. Katie is a timepiece enthusiast and freelance writer contributing to such distinguished literary journals as McSweeney’s, Tin House, Prairie Schooner, and more.