Here’s a look at some watches a little out of the ordinary.

Below is a bunch of digital or direct read mechanical watches from the 1960s & 70s. Direct-read pocket and wristwatches watches have been around for a long time. They made somewhat of a resurgence in the later 1960s and tended to have cushion shaped cases (although not always) with larger display windows than the earlier watches. The concept being that the time could be “directly” read without needing to interpret watch hands. In reality, these digitals can be quite difficult to read, especially when they depart from having the time displayed in a logical, linear fashion. Some dials had separate windows scattered about almost willy-nilly as with the Endura example below. The Caravelle and Regina watches also have a jump-hour feature, wherein the hour display “jumps” to the next hour as opposed to moving continuously. The jump can be readily felt when wearing the watches, a tactile indication that another hour has passed. 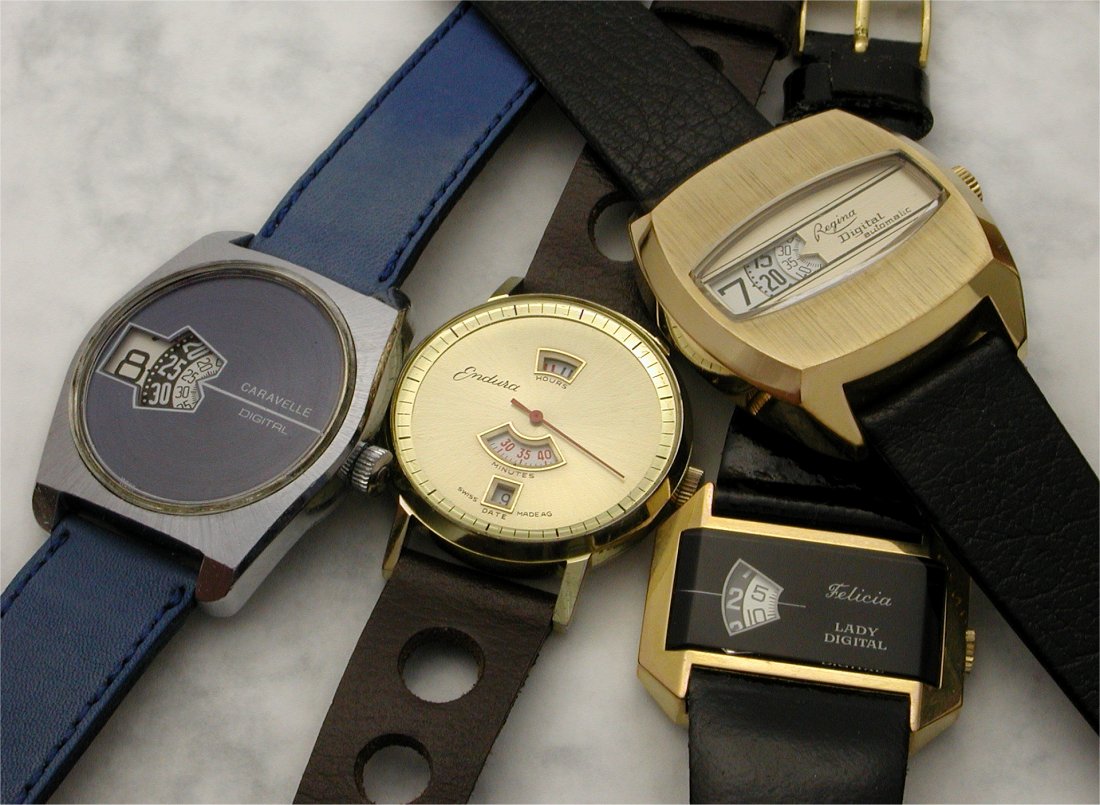 Next up is a mystery watch, a Zodiac Astrographic 2000. The hour, minute, and seconds hands are replaced by stacked clear discs with hands painted on them, and a red dot for the seconds indicator. Thus they have no visible means of support – a mystery. This was the last in a long line of Astrographics before the company was bought by Fossil. The watch uses an ETA cal. 2824 automatic movement. Another interesting aspect of this model is the perlage applied to the metal dial. 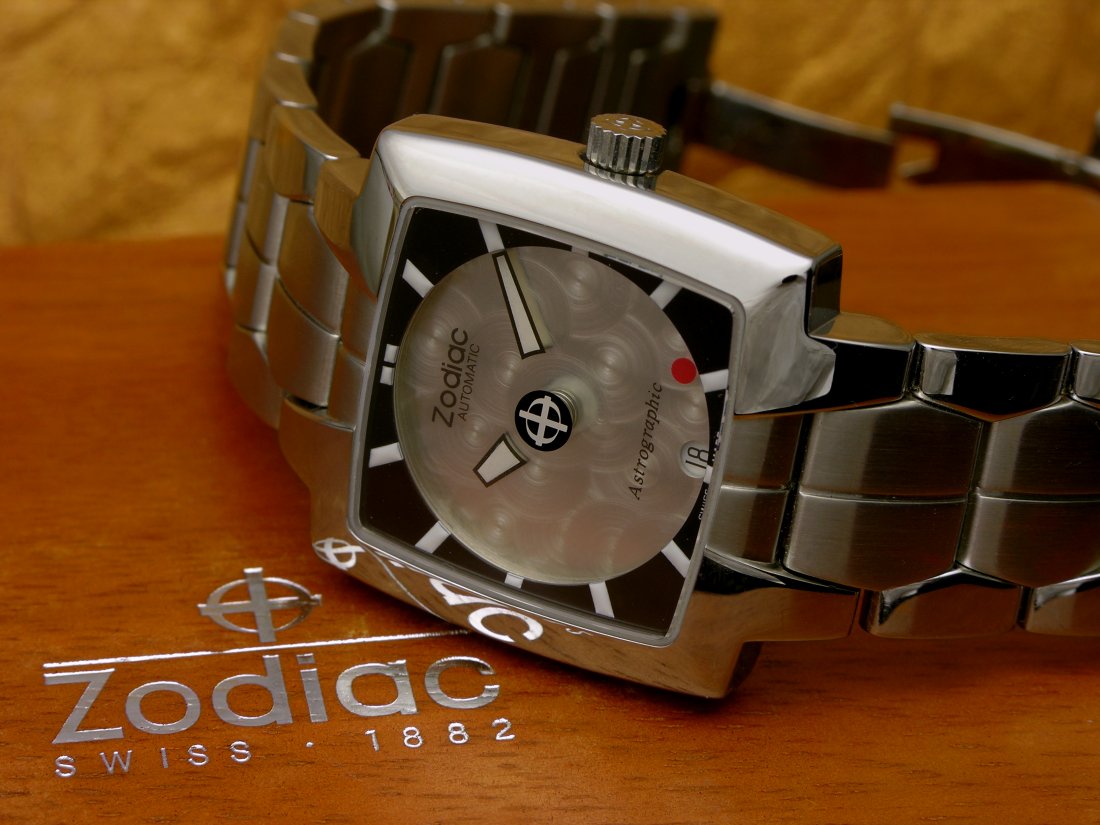 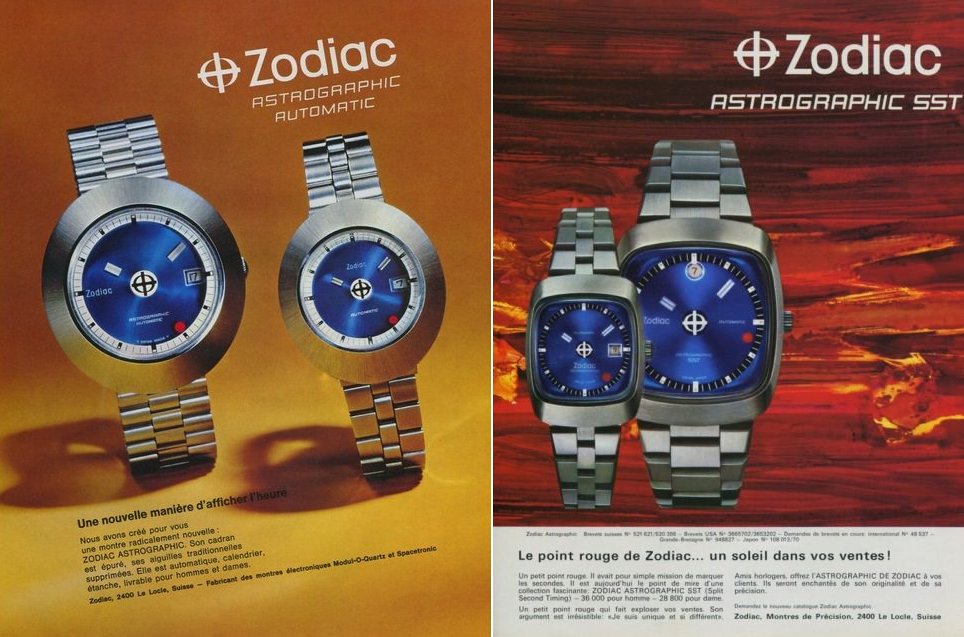 Seiko Nooka. The watch was released by Seiko in 1999 but the designer, Matthew Waldman, was not pleased with Seiko’s interpretation of his design and Nooka watches are now offered by a separate company. Seiko didn’t market their Nookas very well and they were discontinued quite quickly. It is quite a large watch, with a stainless steel case measuring 38mm x 36mm, (less lugs and pushers), and is 12mm thick. The leather strap is a hefty 30mm wide with a double tang buckle. The novel LCD time display consists of a bar display for the hours, large window for minutes, and smaller window for seconds. In this photo the watch is displaying the time 10:12:40 PM. 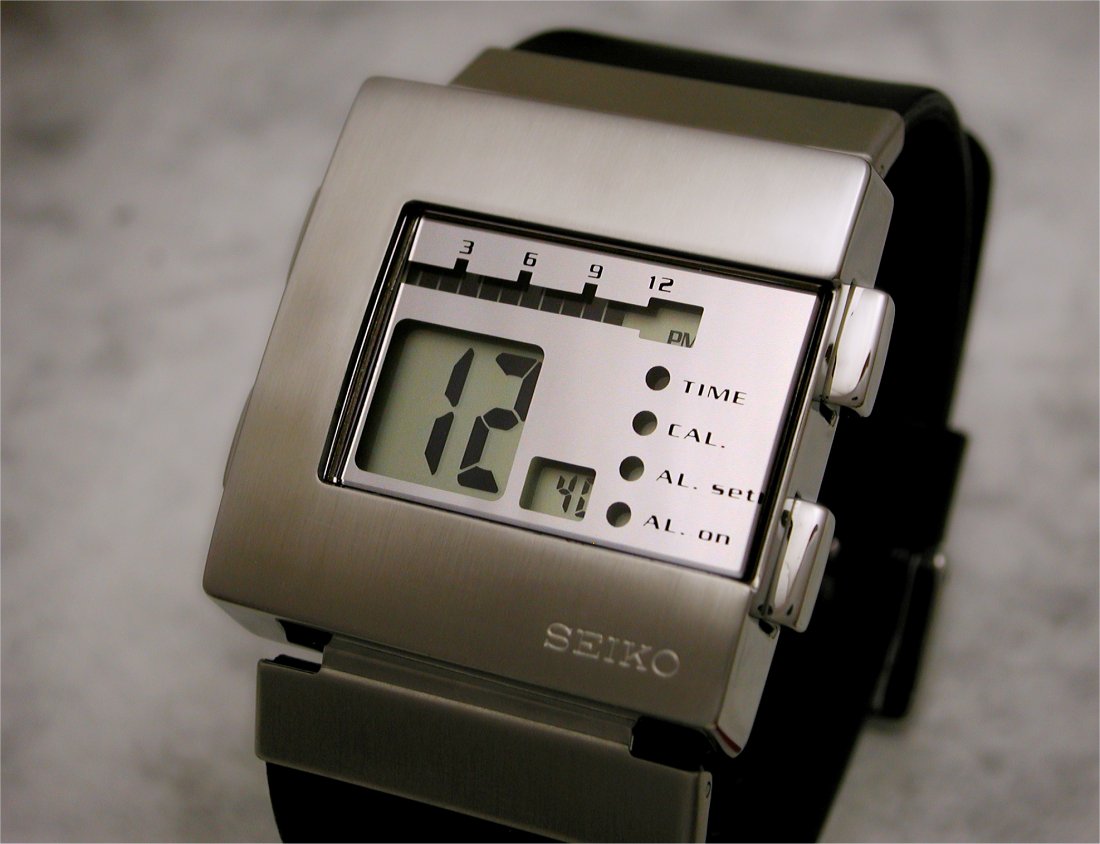 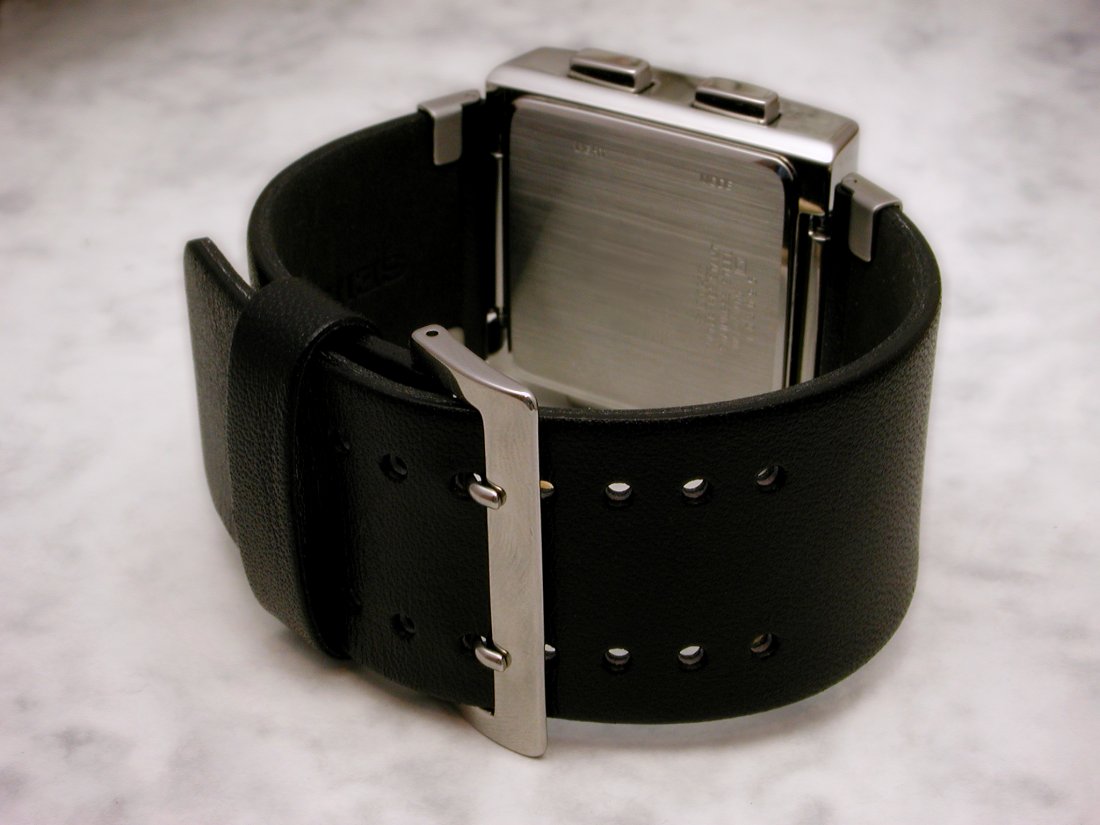 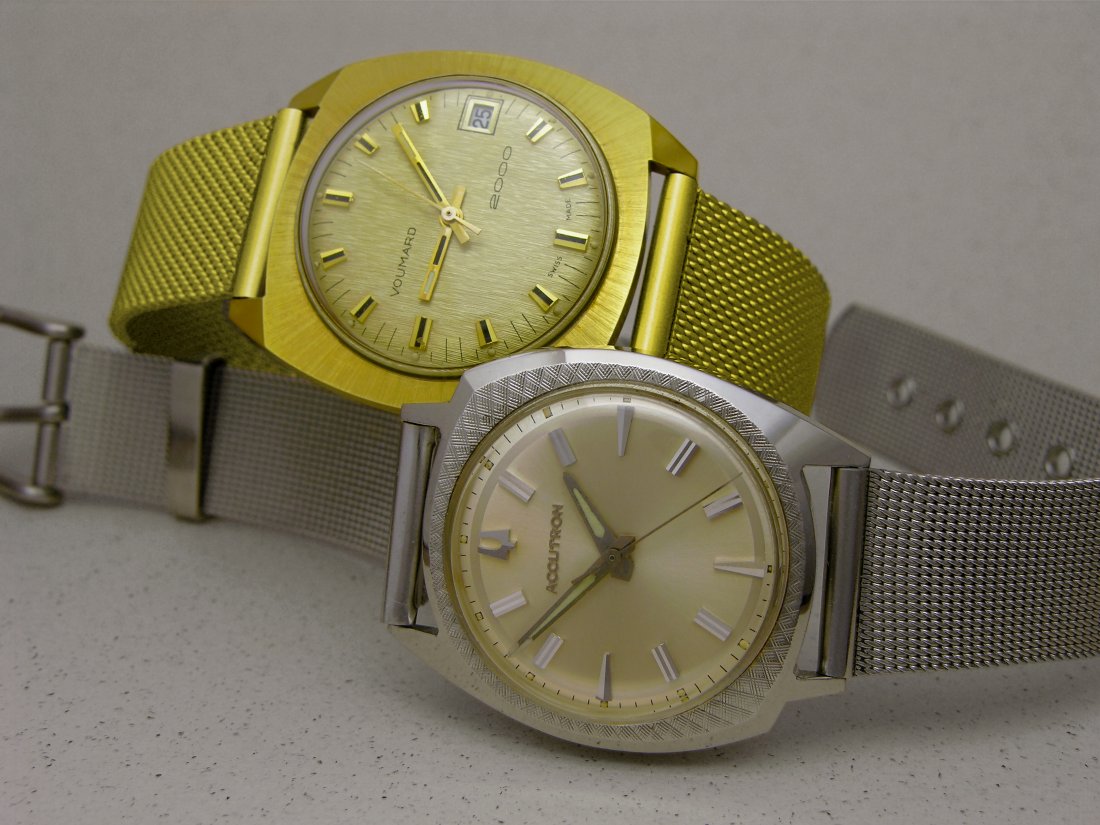 The caseback of the Accutron features a screw battery hatch and a flip-up key for setting the time. The Voumard’s back mounted crown operates just like a normal crown – it winds in the “in” position and pulls out to set the hands. 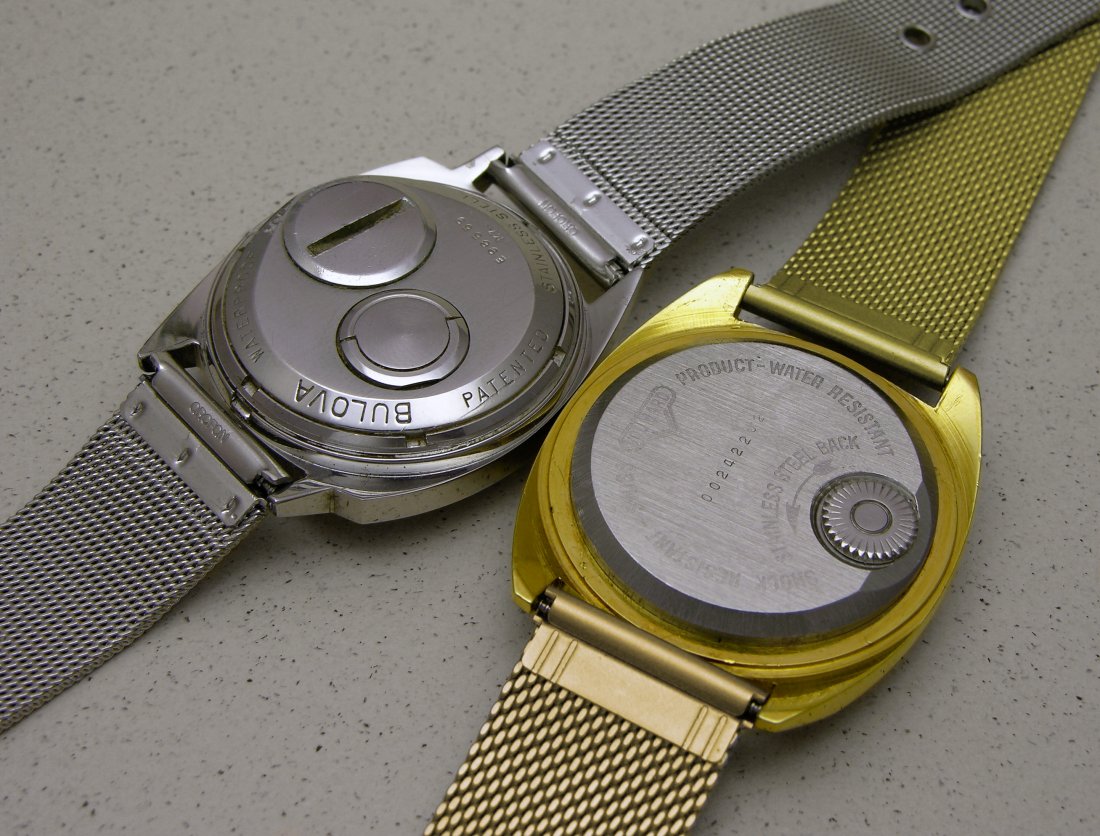 Access to the movement on the Voumard is a little unusual, also. The whole body of the watch, comprising movement/case/dial/crystal, presses out of the rear of the bezel. The movement is a 17 jewel 19,800 bph manual-wind cal. VM 2500, which I assume is of Voumard’s own design. 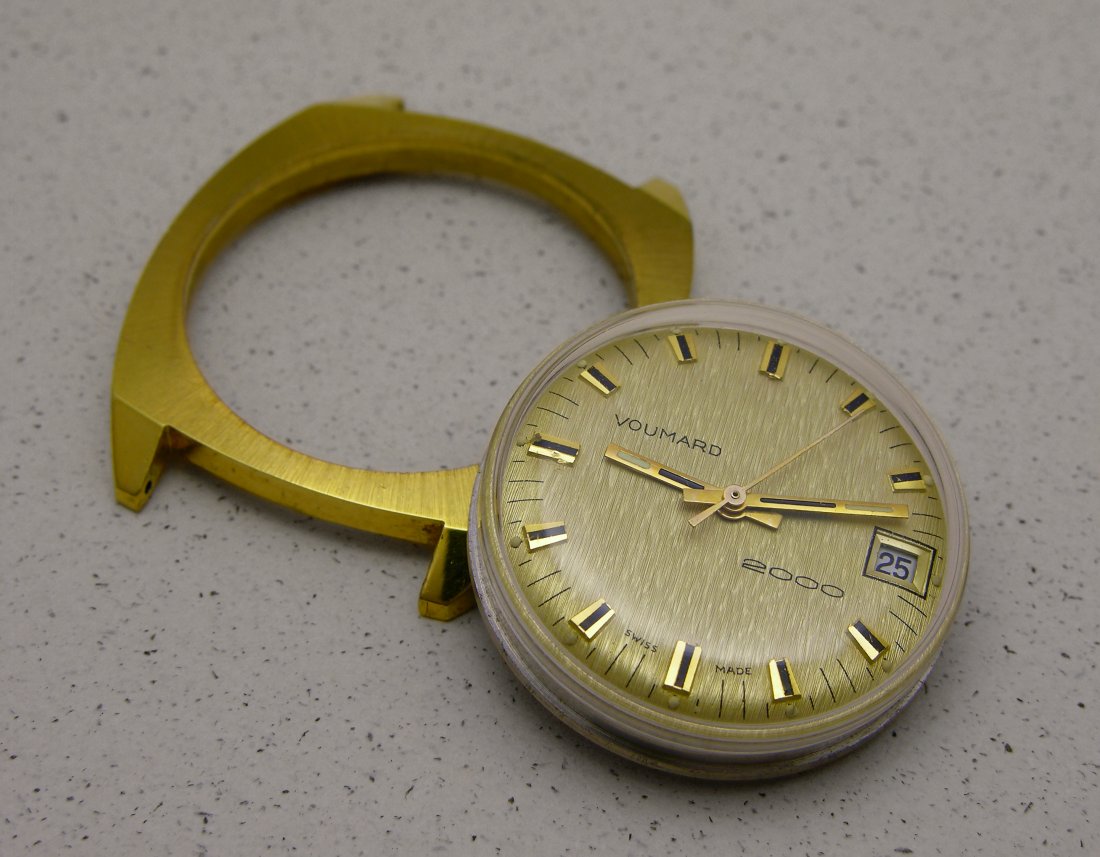 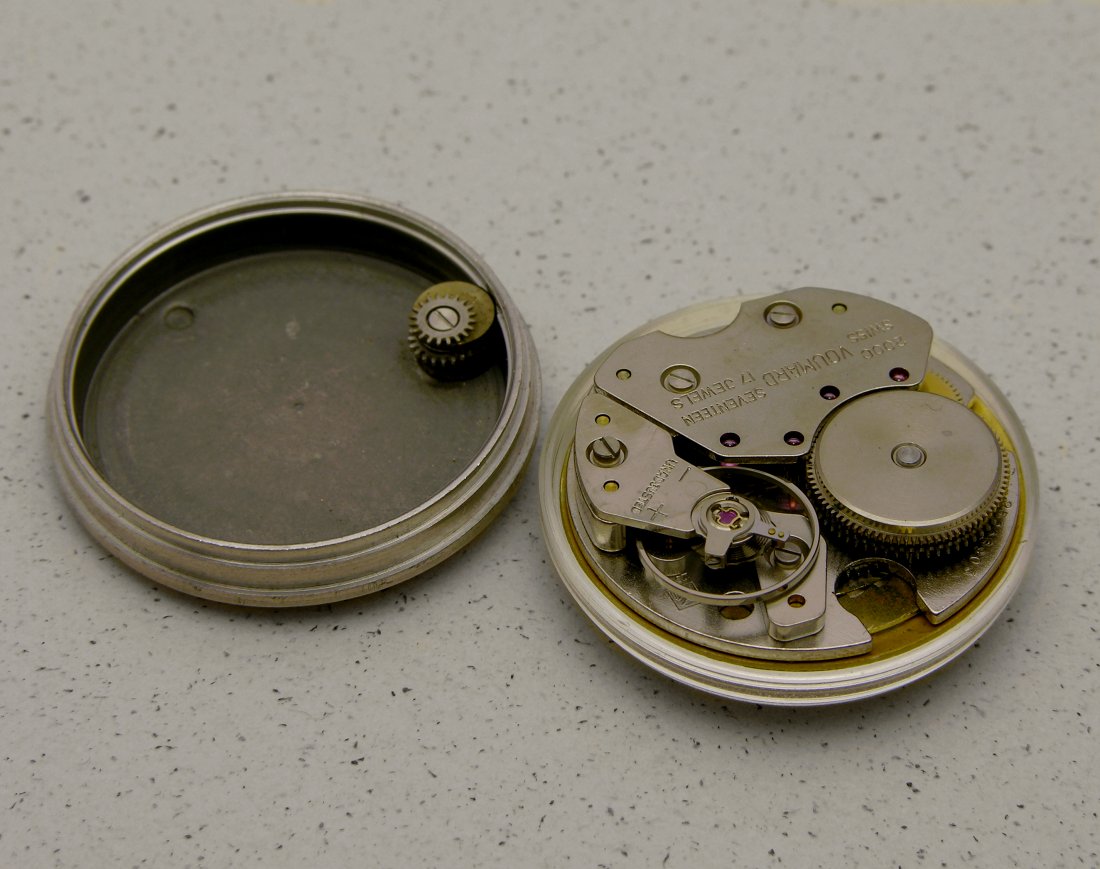 1946 Hamilton Grade 917 pocket watch with “Safe Driver” dial awarded for 10 years of safe driving. The distinctive Hamilton applied gold numerals are replaced with letters. I have two of these Safe Driver dial Grade 917 watches, both awarded to drivers for the Continental Baking Company one year apart in 1947 and 1948. This company introduced Wonder Bread in the early 1920s and Twinkies in 1930. They ended up with over 40 bakeries across the USA and distributed to store shelves on more than 7,000 delivery routes. So, Frank and John may well have worked in different states and never met, but you never know. 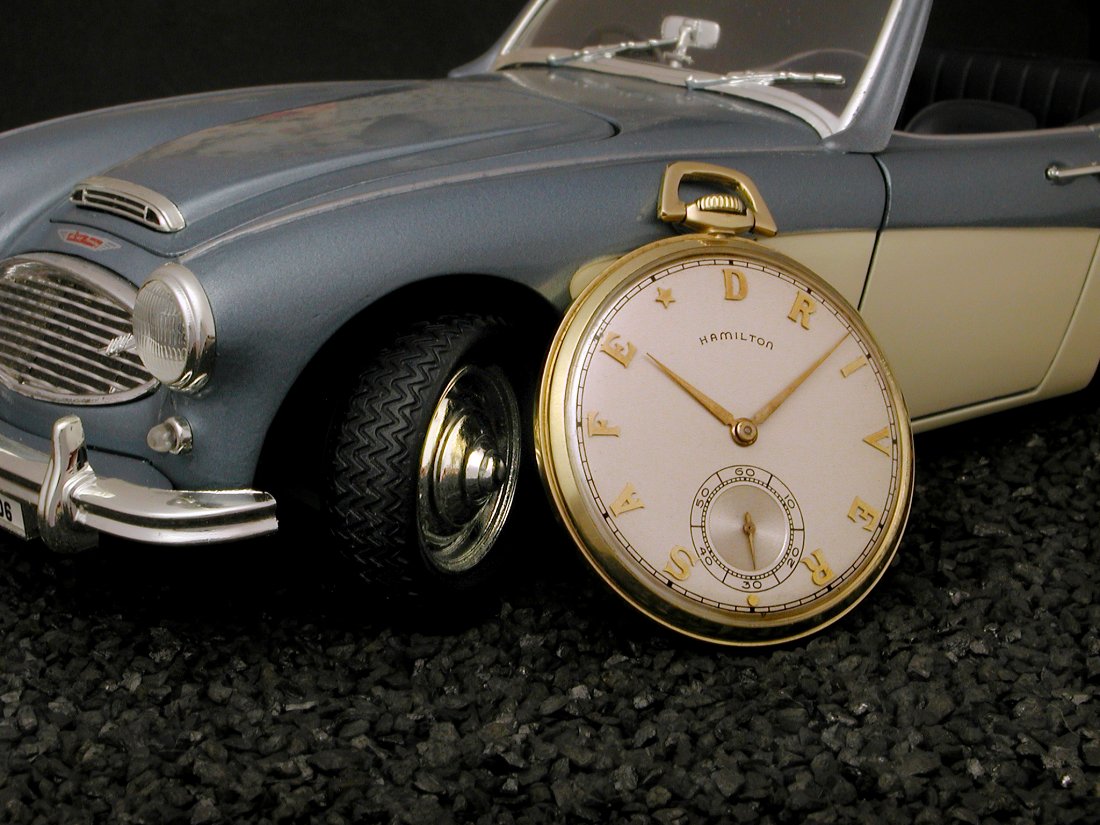 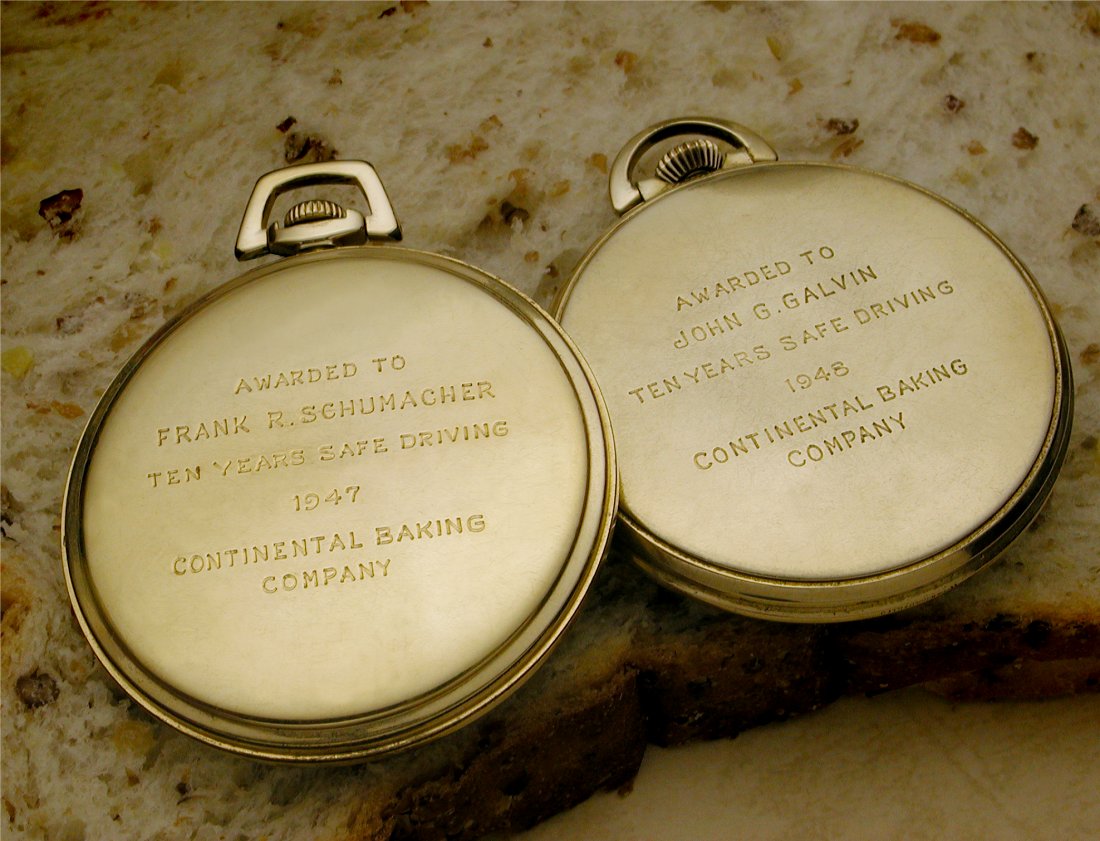