On Wednesday evening, Seiko hosted a very special event at the Royal Observatory, Greenwich. Greenwich, whose name will forever be associated with the ‘G’ in GMT, is not only the place where the 0 meridian begins, but also houses some of the most important timepieces in the world.

Walking up to the Observatory, you look down across Greenwich Park on to the temporary grandstands built for the recent Olympic equestrian events, over The Queen’s House, built by Inigo Jones in 1616 with the lights of the City in the background. 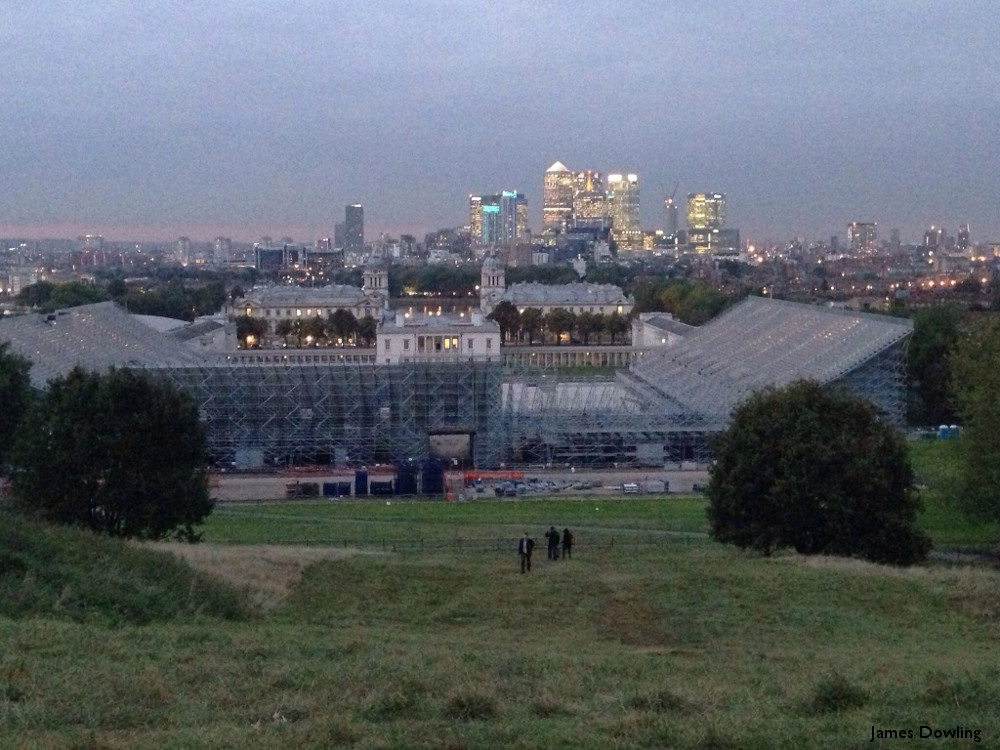 The Greenwich meridian is indicated by a metal band running though the courtyard of the Observatory, but also nowadays by a more up to date method; with a green laser cutting through the sky at dusk. 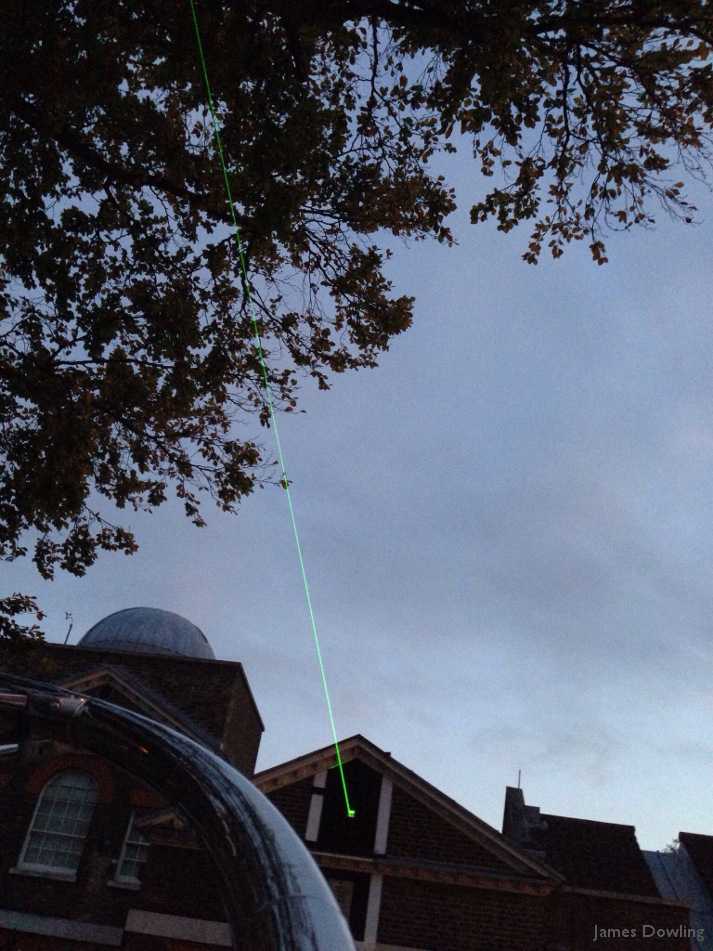 We were welcomed into the Observatory which has recently been reorganized, so that all of the timepieces concerned with the solution to the Longitude question are now assembled in one place; from all four of Harrison’s attempts to the watches used by Captains Cook & Bligh on their expeditions as well as important navigational clocks from such famous English makers as Mudge, Graham, Earnshaw and Arnold were all there; including the most important timepiece in the world, Harrison’s H4. 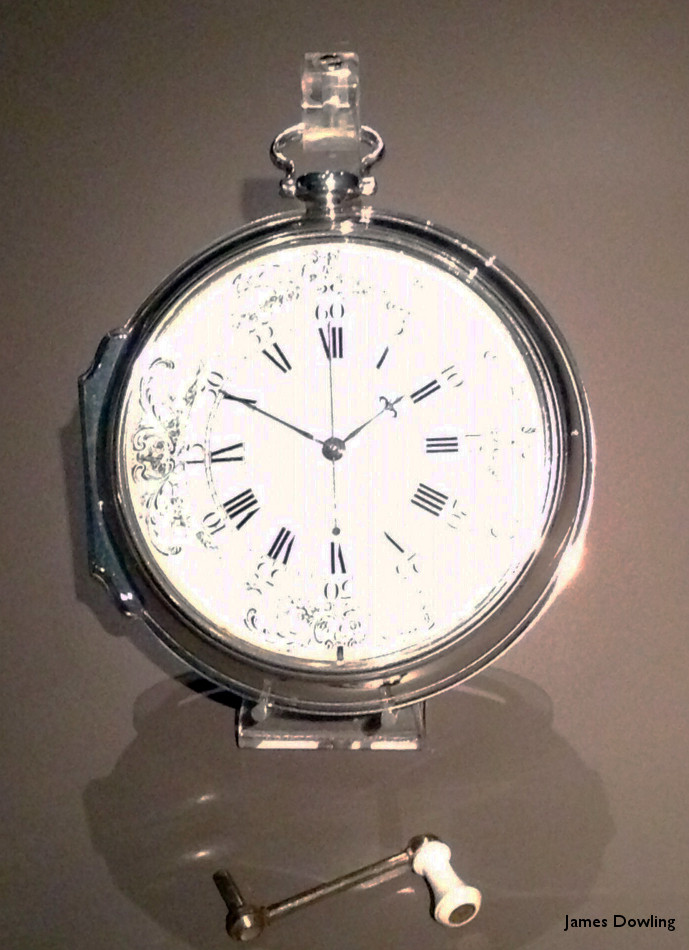 But all of the timepieces were given close scrutiny by those lucky enough to be invited. 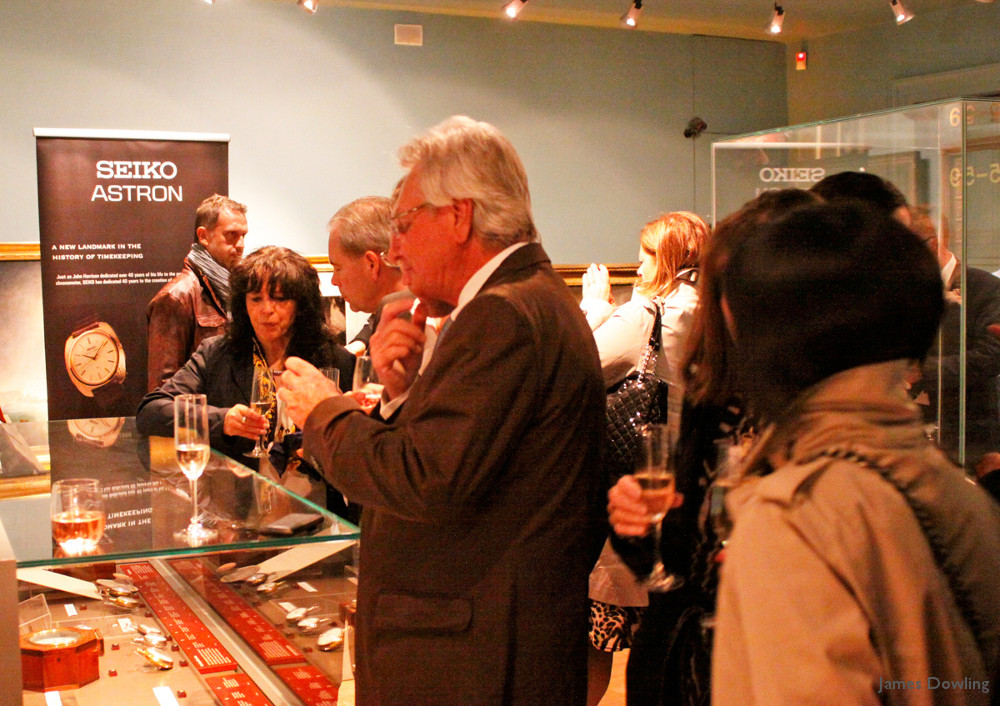 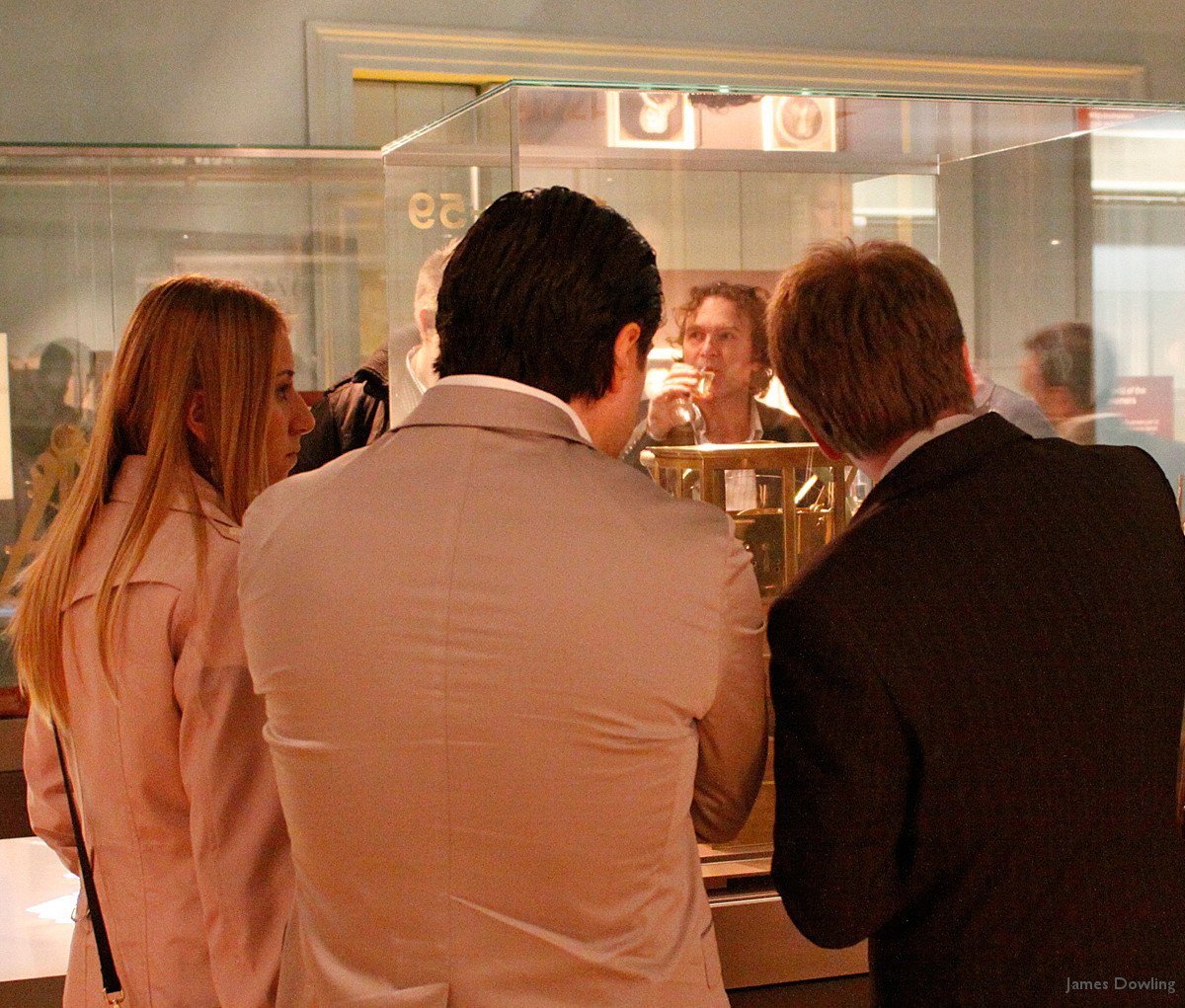 Whilst many of us remained in the gallery, others ventured out into the unseasonably mild evening where the new Seiko Astron GPS Solar watch was being shown to more than a few brave souls. 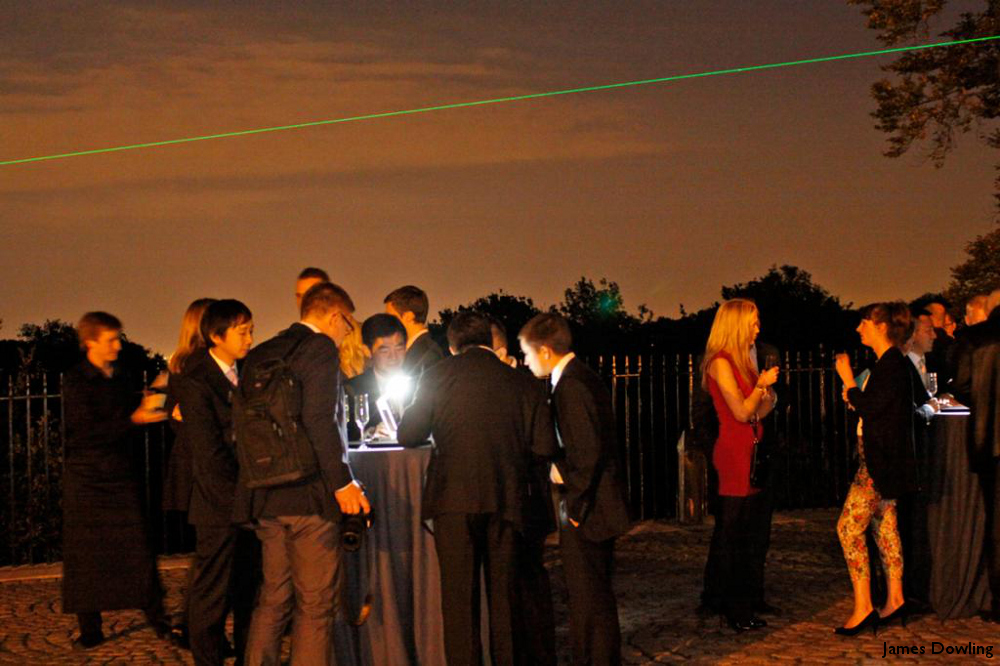 The Greenwich meridian laser can be seen much more clearly in the above photograph, and even better in this one, taken from 90⁰ away from the one above. 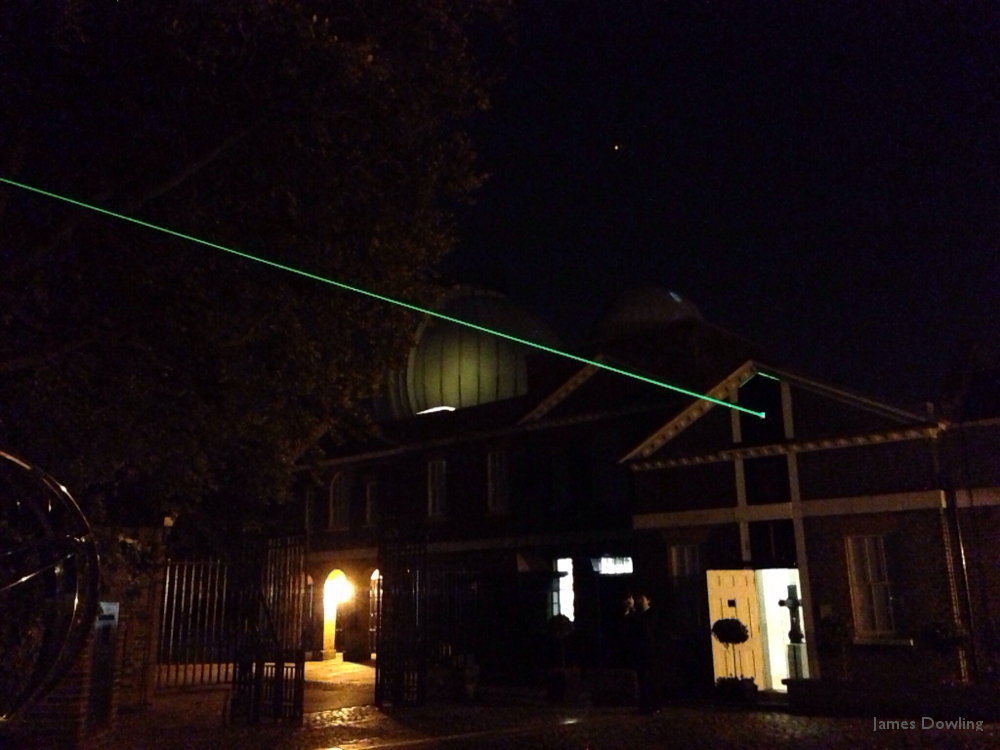 Whilst everyone was looking at either the new or the very old timepieces, I took the opportunity of going upstairs to the old Observatory. 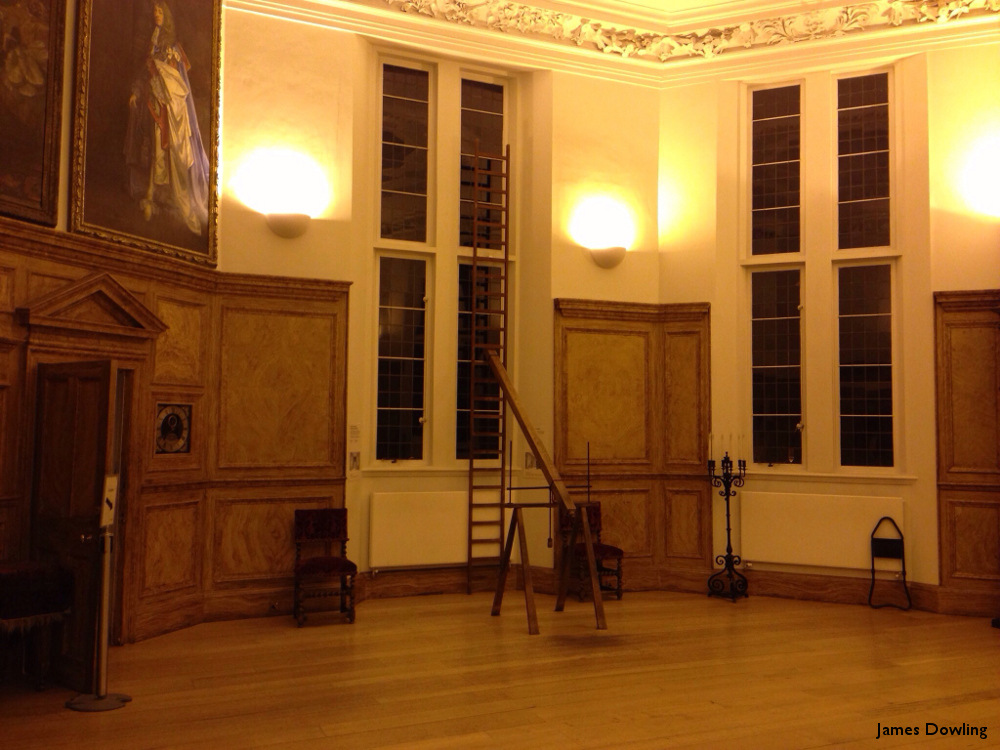 Where several of Thomas Tompion’s long case clocks were on display; some of them were the actual clocks used by Flamsteed, the 17th Century Astronomer Royal, who catalogued almost three thousand stars using Tompion’s clock for precise timing. 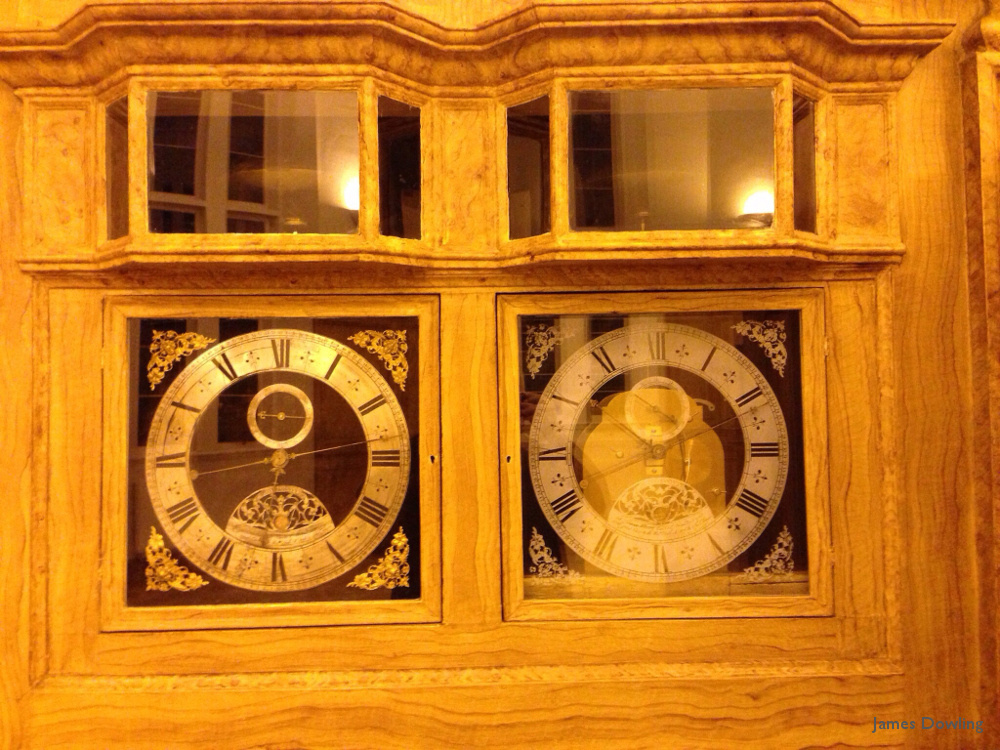 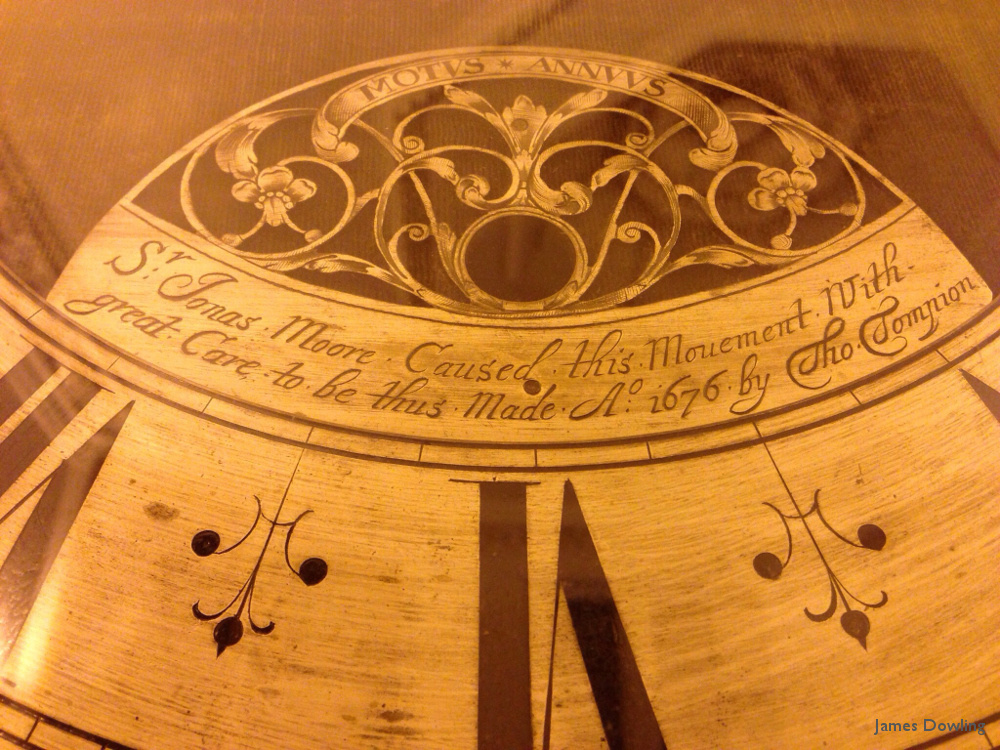 Then it was time for the actual launch, held inside the Observatory’s planetarium; I will discuss the watch & its functions a little later in this post.
After the launch it was time for dinner, the image below was my starter, a fig & beetroot salad on goat’s cheese. 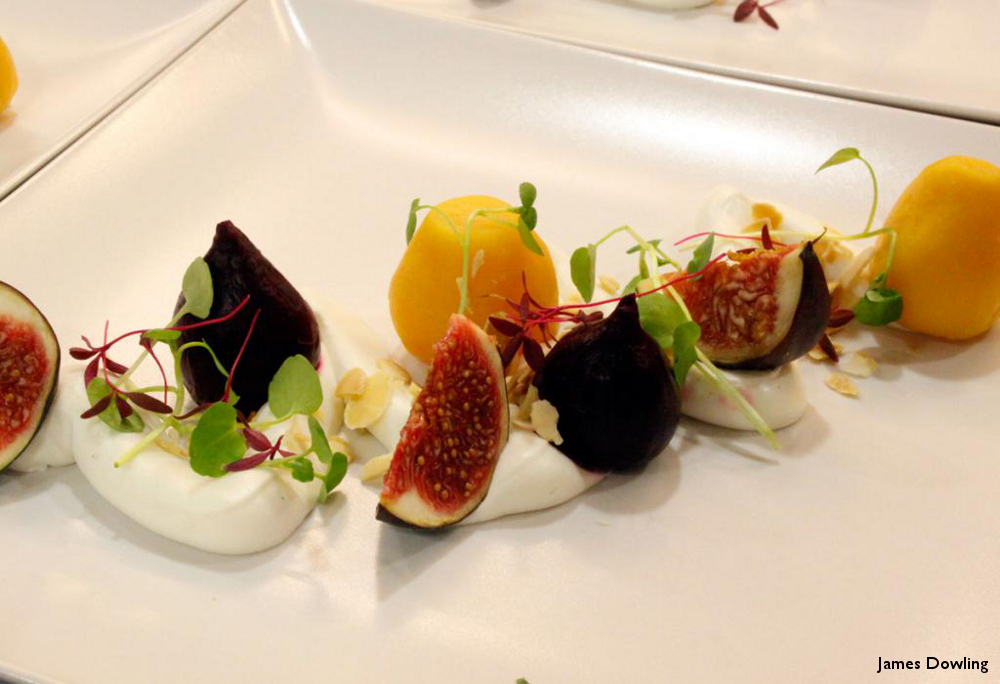 Once the meal started I had neither the time, nor the interest to take any more food photographs; sorry. Of course, the question you have all been asking is ‘What watch did you wear?’ This one. 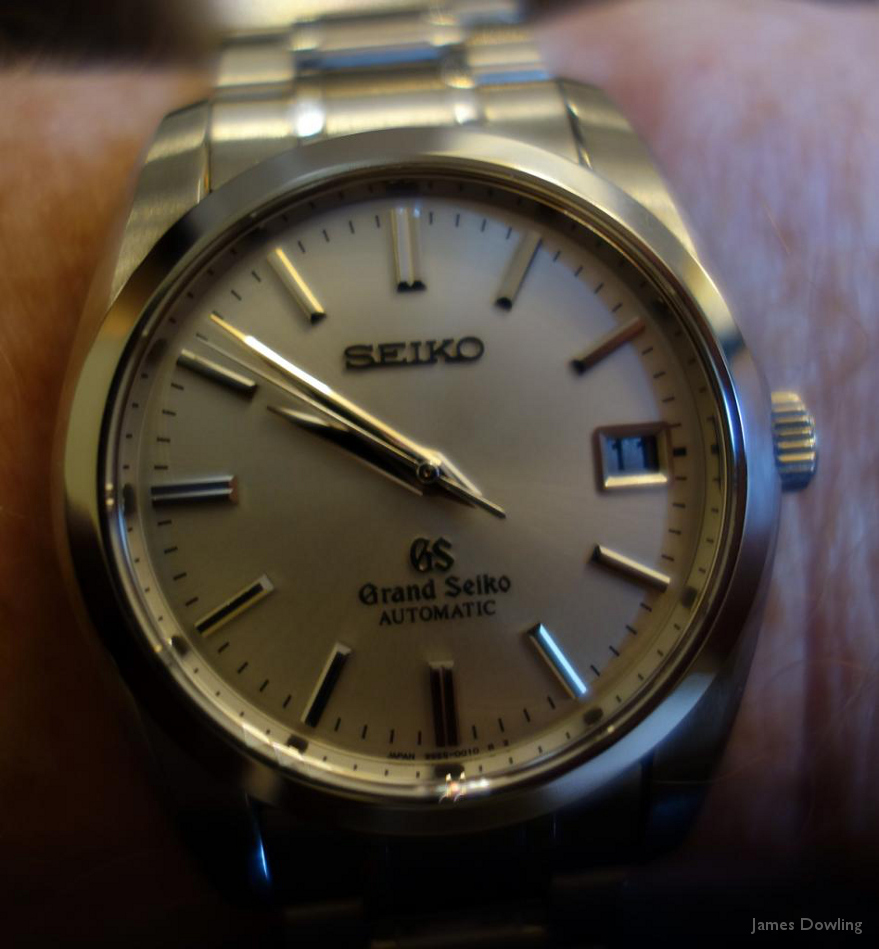 Now, to talk about the watch itself; the new Astron GPS Solar; I am going to begin by talking about the name of the watch, and, as I say that I can hear a collective ‘Huh?’ from all my readers. But, let me explain, the actual name of the watch is quite interesting in itself. This is only the third Astron watch from Seiko in over 40 years; the very first watch ever & the titanium ‘hommage’ watch made a couple of years ago; this should tell you something, when Seiko call a watch an Astron, it is something special in their eyes; GPS obviously means Global Positioning Satellite, but this watch uses GPS not to tell you where you are but in what time zone you and the watch are located and it then uses it to automatically move the hands to the correct time wherever you are; but it is the final name that is the most significant ‘Solar’; there have been solar powered quartz watches for decades now, but the huge breakthrough Seiko/Epson have made is combining solar and GPS. Anyone who has used GPS on their phone or in a battery operated unit on your dashboard knows that GPS ‘sucks’ battery power like no other facility.

Seiko/Epson’s integrated GPS chip is only 5.6mm x 5.9mm and uses less than 20% of the power used by a normal GPS module and the power conservation is massively helped by the sensor which runs the GPS, rather than constantly seeking satellites it actually ‘thinks’ when is the best time to scan the skies. Once a day it waits until it is in bright sunlight or under other bright lights, giving it a full charge & then it searches for a signal, once it gets a signal it uses this to adjust the time to an accuracy of one second in a thousand centuries. However, if the watch has little or no light falling on it, it ‘remembers’ the time of the last update and tries then. I mentioned that it seeks a signal every day, however if the watch has very low light levels falling on it, it will extend the time between scans until the light levels return to normal. The power usage is so low that there is sufficient energy left to run a perpetual calendar module, so that not only does the watch know the correct time anywhere in the world, but it also knows the correct date.

Even the antenna for the GPS is rather different, instead of using conventional off the shelf ones, Seiko/Epson developed a new ring shaped antenna which sits around the dial and, in order for the signal not to be attenuated by the metal case, it sits under a ceramic bezel, no matter which material the case is made from.

That is just some of the technology involved in the creation of the watch; let’s talk about how this technology is used. Remember that GPS has no concept of time zones but only the latitude, longitude, and altitude. This means that the location and the time zones must be linked. ASTRON has a database of time zones which identifies the local time by matching the location information and the time zones database. The database, held on a chip, matches over a million GPS locations to their time zone and instructs the module which moves the hands and tells it to where they should be moved.

Unlike conventional multi time zone watches, the Astron GPS Solar doesn’t use just the conventional 24 hour time zones, each representing an arc of 15⁰ longitude, rather it uses all 39 distinct time zones. Including the strange ones where the location is 15, 30 or 45 minutes past the hour. 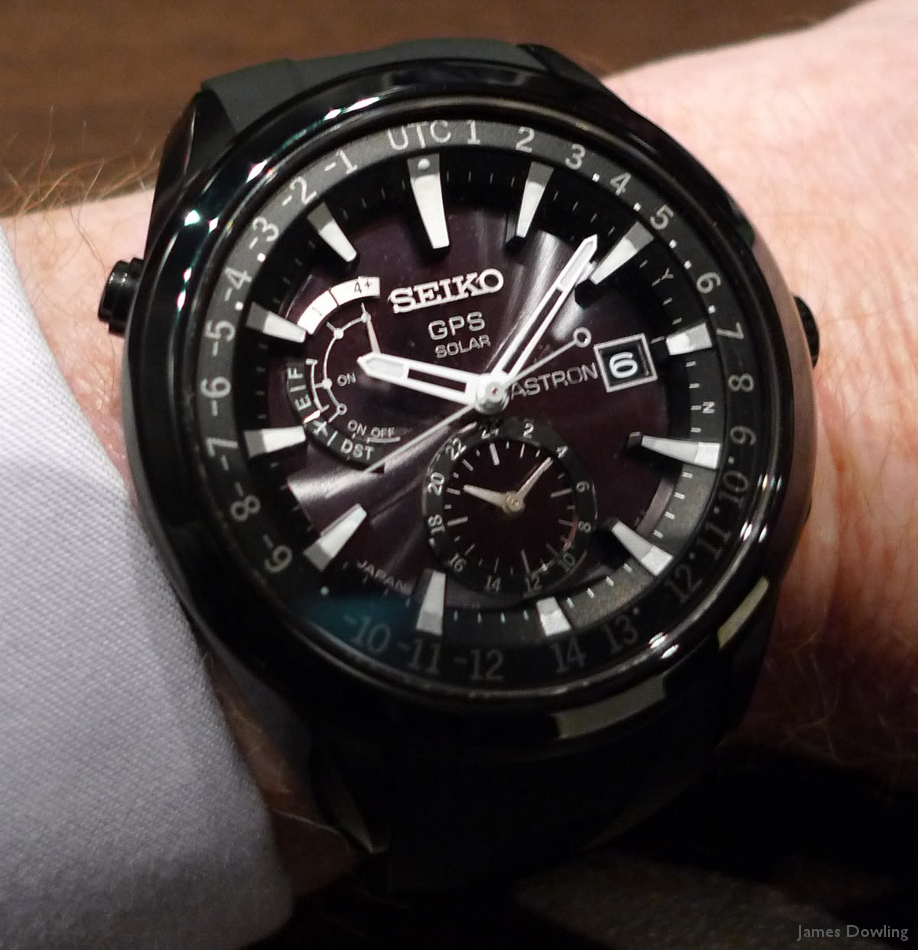 What is great about the watch is that all of this technology is contained in what can best be described as a ‘normal’ watch; it isn’t cluttered up with ‘bells and whistles’; there is just a date aperture, a second time zone dial (for your ‘home’ time) and a mode setting sector. It is a sizeable 47mm, but actually wears much smaller on the wrist; just have a look at the above image. Available in either steel or titanium, I very much recommend the titanium version as the steel version seems much too heavy on the wrist.

It is quite an expensive watch, with the prices ranging between £1,500/£2,500 (€2,000/€3,300 or $2,300/$3,750) but for the world traveler there is no other watch currently available which can do what the Astron GPS Solar offers right now. The watch was launched the previous week in Japan on the roof of Seiko’s own WACO store on the Ginza, and the 1,000 units available at the launch were all sold. Similarly, I was told at the launch that the entire European allocation was all allocated even before the launch. 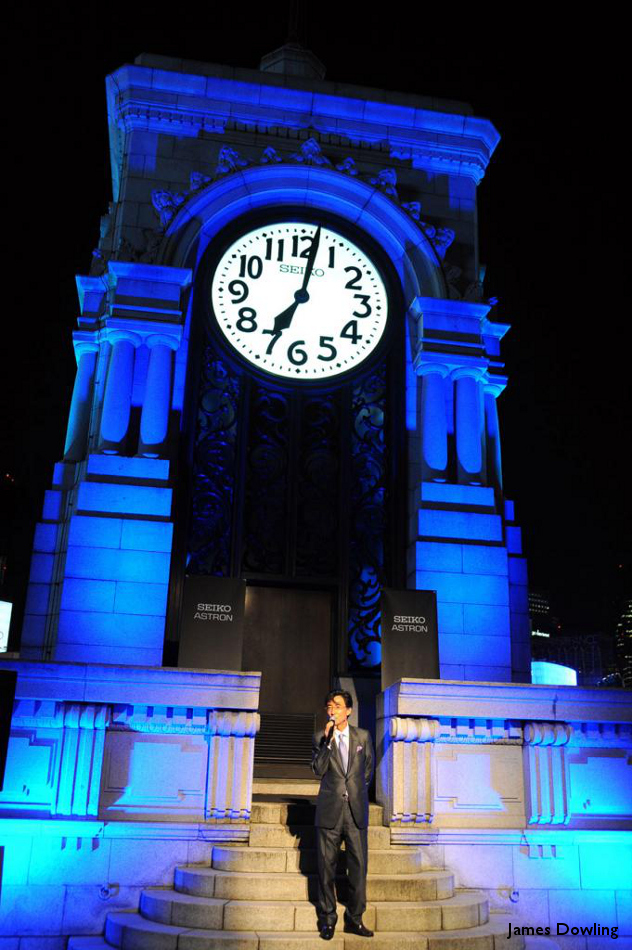 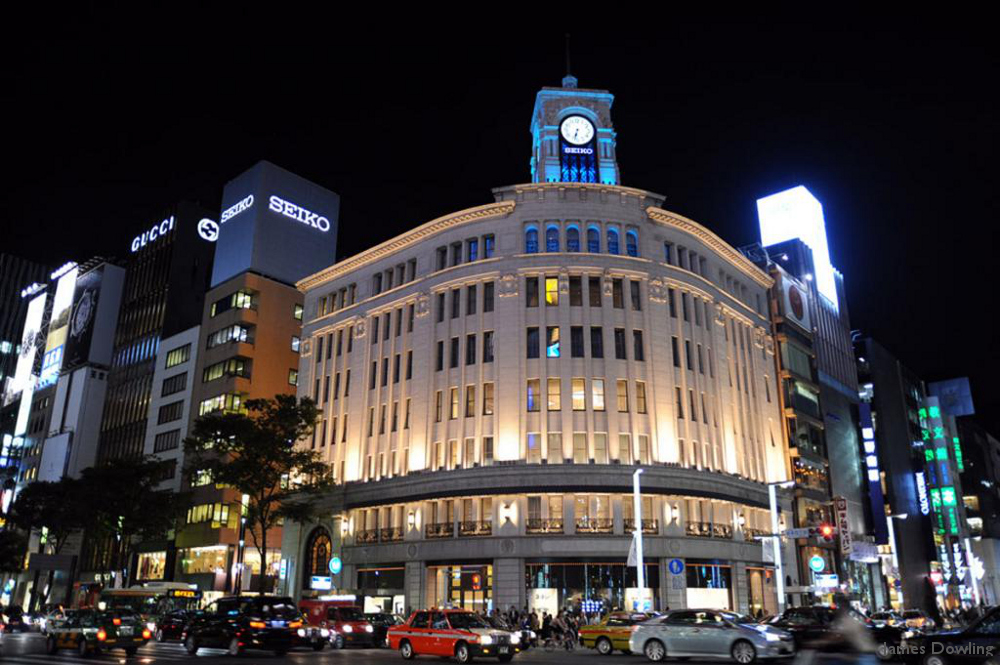