Premiere Viewing of the Parmigiani Fleurier Bugatti Vitesse by JESSICA

Parmigiani Fleurier officially launched its new Bugatti Vitesse during the Pebble Beach Concours d’Elegance weekend. In keeping with the weekend’s theme of classic cars, the event included the unveiling of a rare 1935 Bugatti T57S Electron Torpedo. 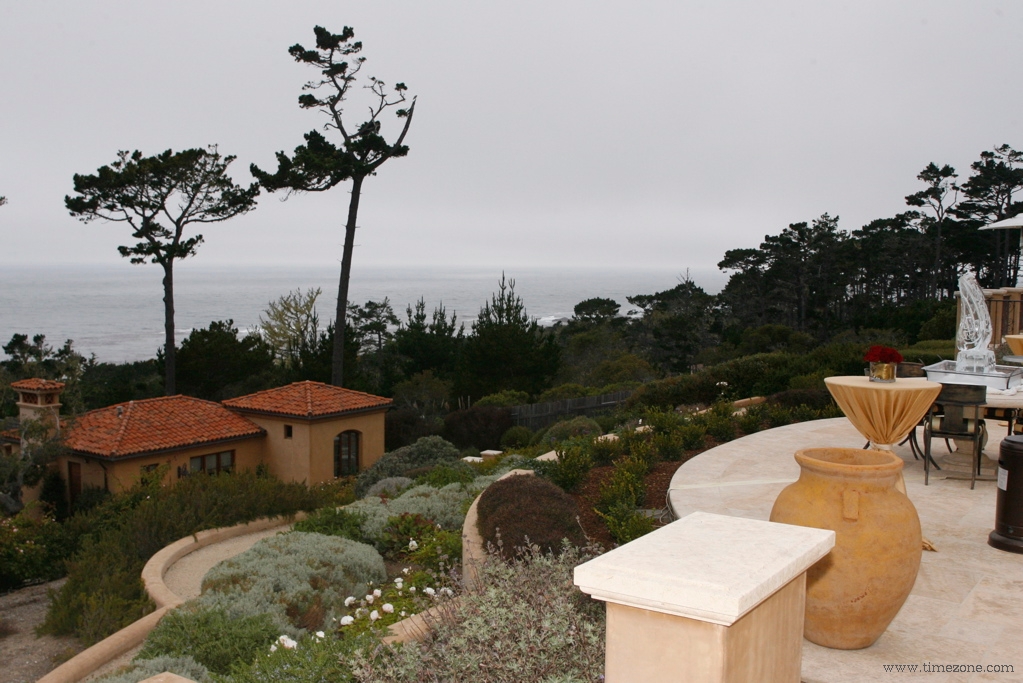 Similar to the greatest watchmakers throughout history, Parmigiani Fleurier revels in over-complexity. The Bugatti Collection embodies Parmigiani’s audacious and pioneering vision of handcrafting technically superb timepieces in its distinct style. The new Bugatti Vitesse is the third addition to the Bugatti Collection and is inspired by the new convertible Bugatti Veyron Grand Sport Vitesse unveiled at the 2012 Geneva Motor Show. 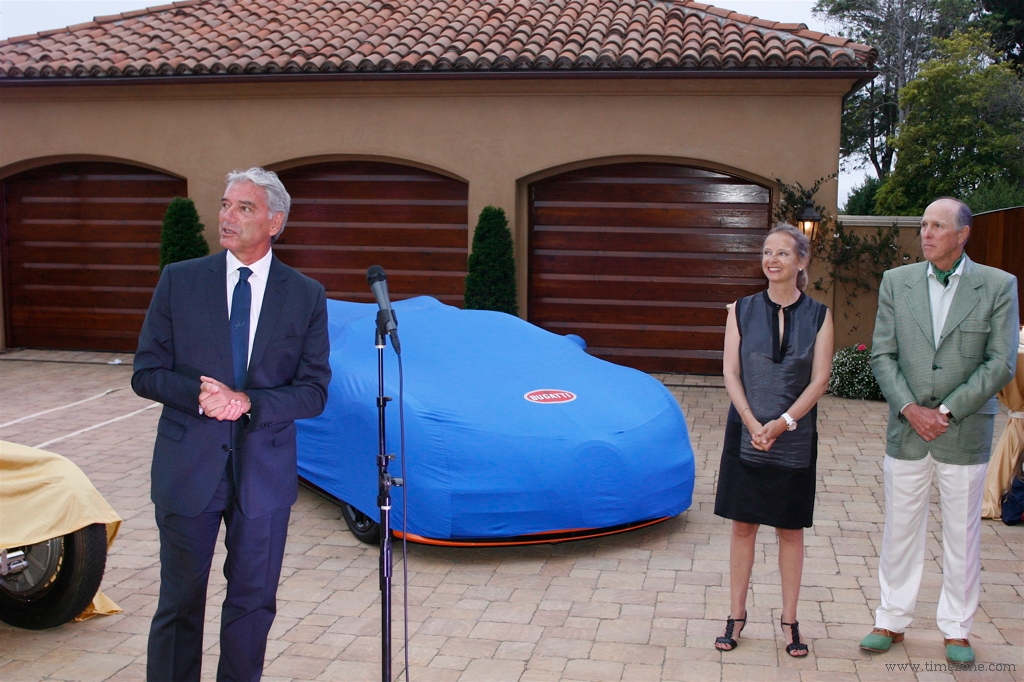 The Bugatti Vitesse reflects reworked shapes, colours and materials. All the mechanical components of the calibre Bugatti PF 372 are flipped onto a vertical axis, retaining the lateral time display of a drivers watch. The 6-sided titanium case frames six sapphire crystal windows that reveal the entire watch mechanism and functions. Under the top sapphire crystal window is the 10-day power reserve indicator. The crown stem runs through a sapphire crystal window and gaskets seal the case to achieve a water resistance of 10 metres.

Next, prewar car enthusiast and architect Jim Hull delivered an animated speech about his beloved 1935 Bugatti T57S Electron Torpedo. In the 1930s, “electron” was the French word for a magnesium alloy that was like carbon fibre is today. It was high-tech, futuristic and cutting edge. Jim has owned this unique Bugatti for 31-years and lovingly restored his T57 over the past seven years. Jim proudly demonstrated the culmination of his labour by starting the ignition and revving its 300 horsepower. 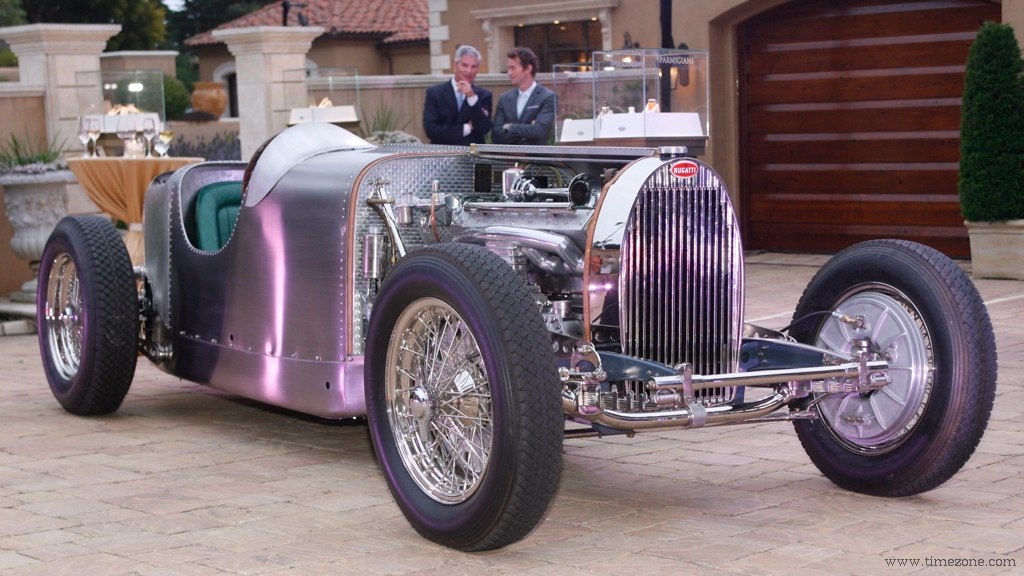 Also attending the event was Bugatti test driver Pierre-Henri Raphanel, who set the world production-car speed record in the Bugatti Veyron Super Sport at 267 mph. Following Jim’s lead, Pierre-Henri did not skip a beat and started the ignition of the new convertible Bugatti Veyron Grand Sport Vitesse and revved its 1,200 horsepower. 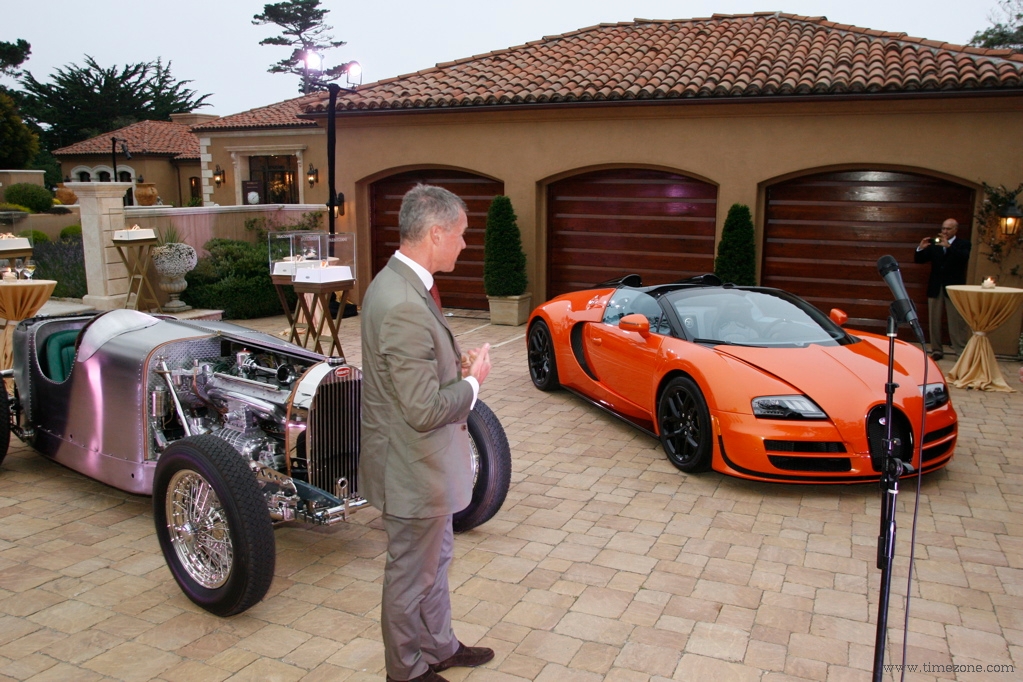 In keeping with a Pebble Beach tradition, Scottish bagpipes played at sunset before dinner. The highlight of the evening was an intimate dinner amongst watch and car aficionados, whose passions for craftsmanship, ingenuity, originality, design and style resulted in hours of engaging conversation. 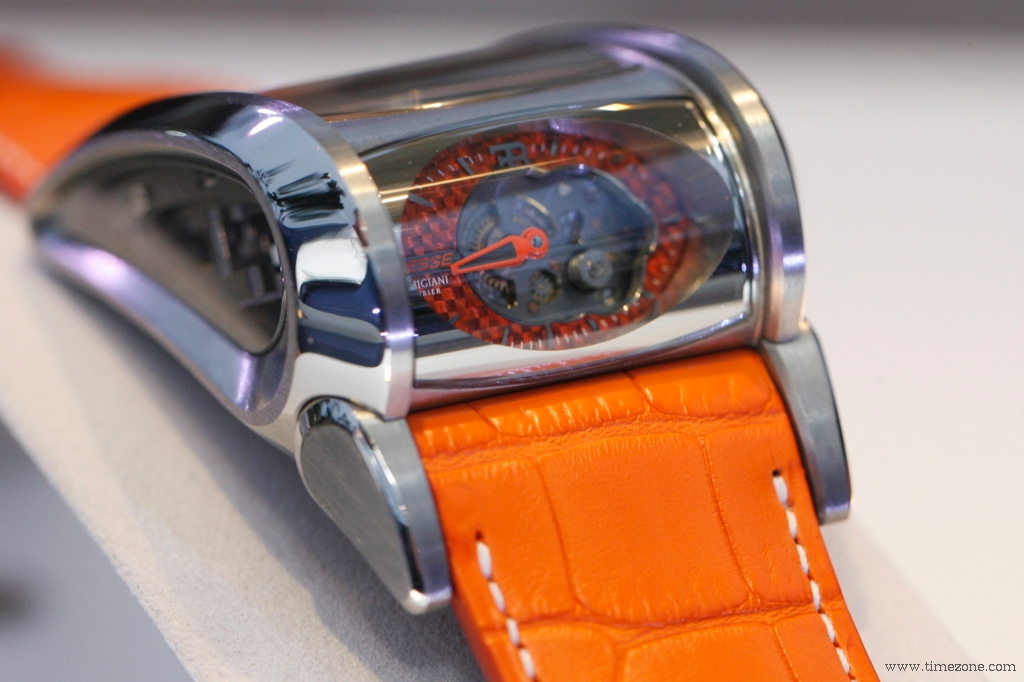 The new Bugatti Vitesse with an orange Texalium dial. Texalium is a web of fibre glass covered by a thin layer of aluminium 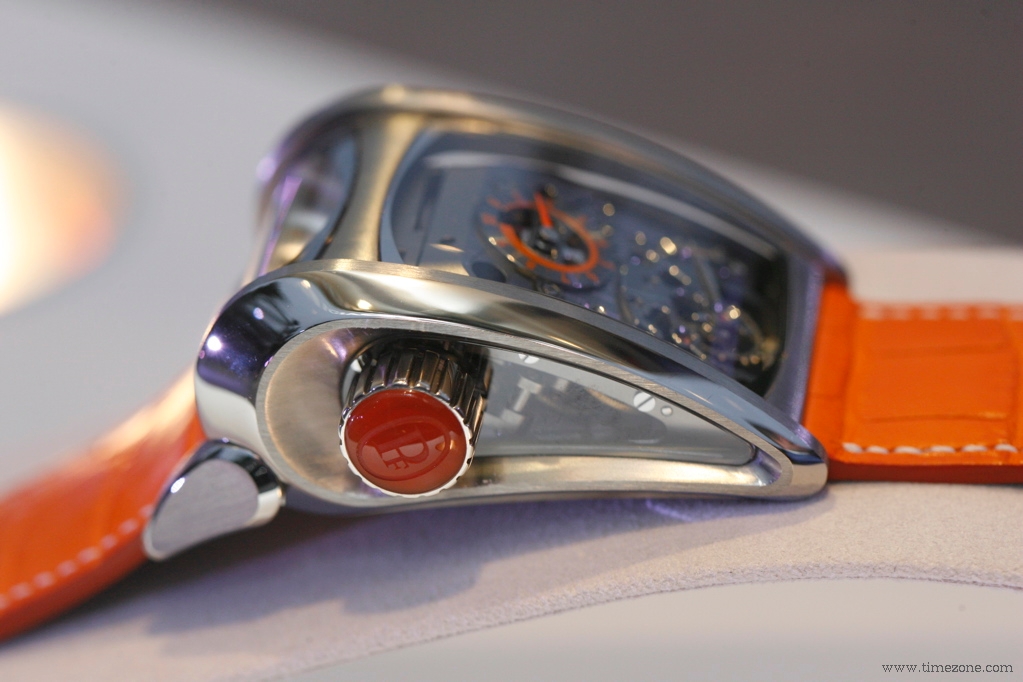 The crown is set with a carnelian cabochon engraved with the Parmigiani Fleurier initials.
The crown stem runs through the sapphire crystal and is sealed with a gasket for water resistance 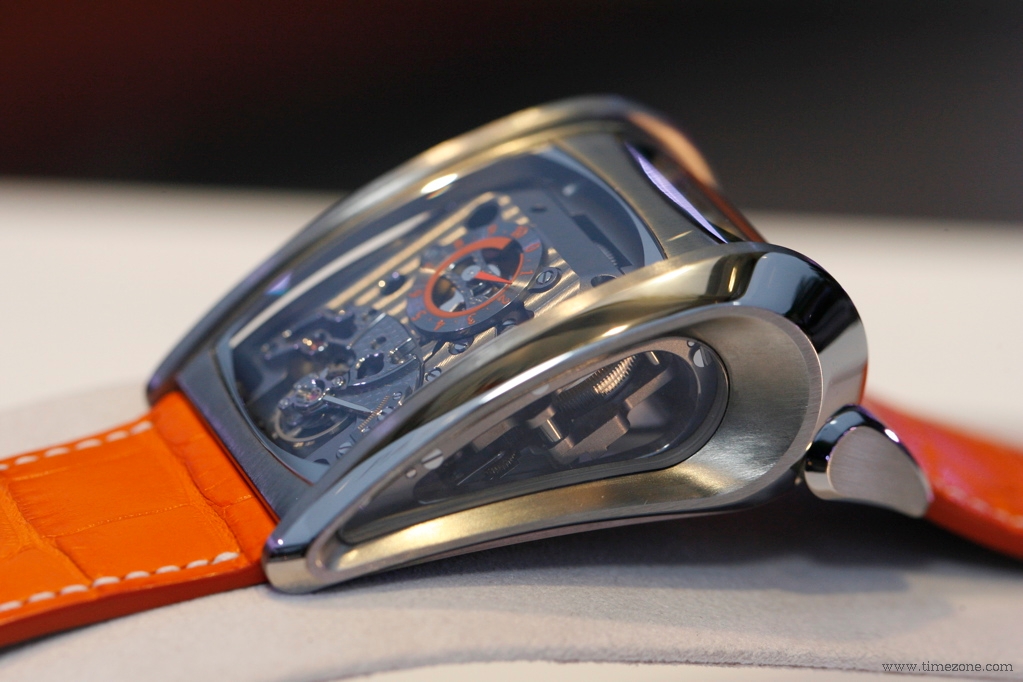 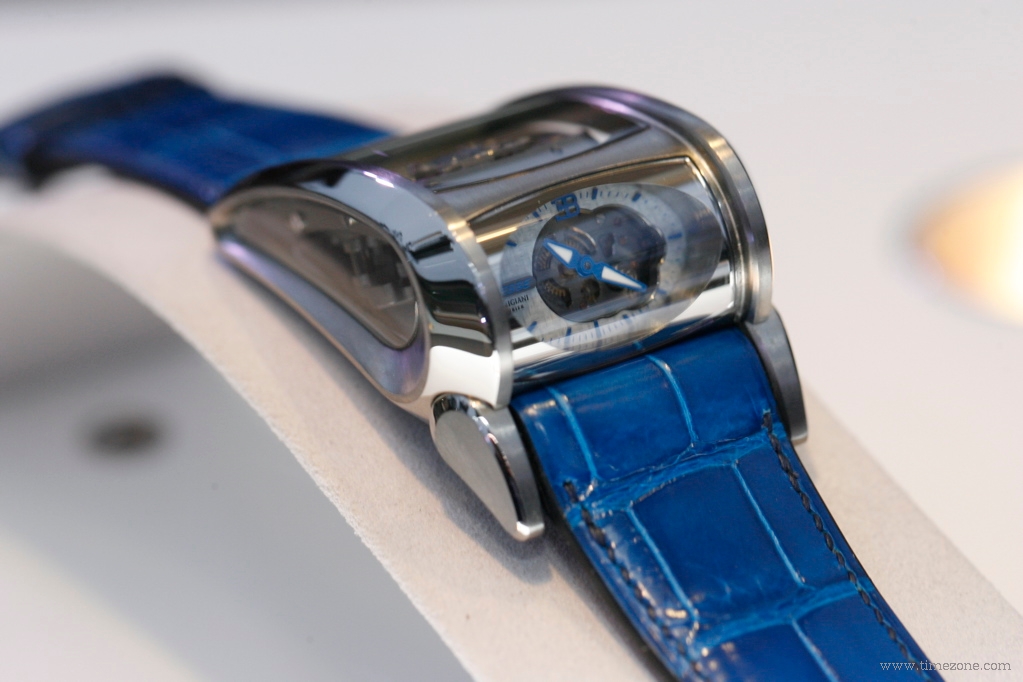 The new Bugatti Vitesse with a white Texalium dial. The dial is displayed at a 90° angle 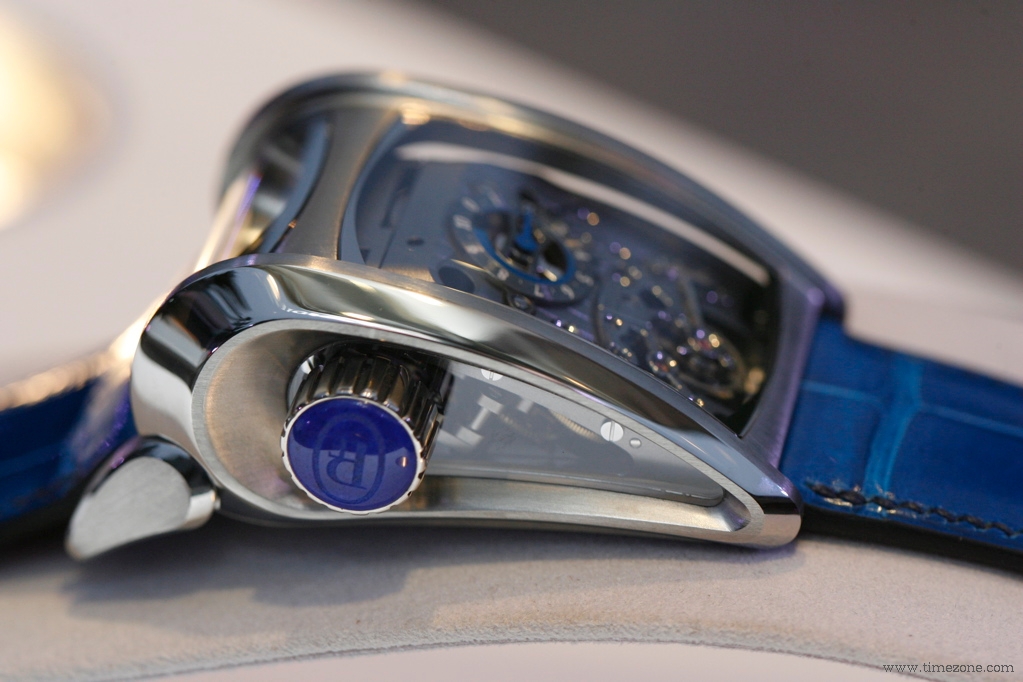 The crown is set with a lapis lazuli cabochon engraved with the Parmigiani Fleurier initials.
The crown stem runs through the sapphire crystal and is sealed with a gasket for water resistance 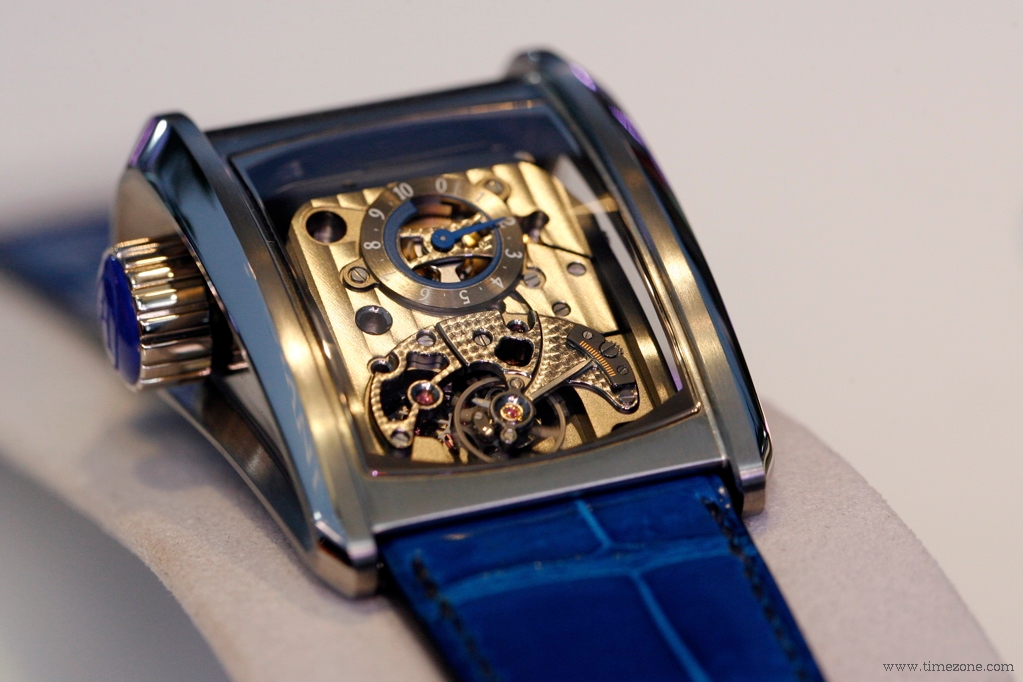 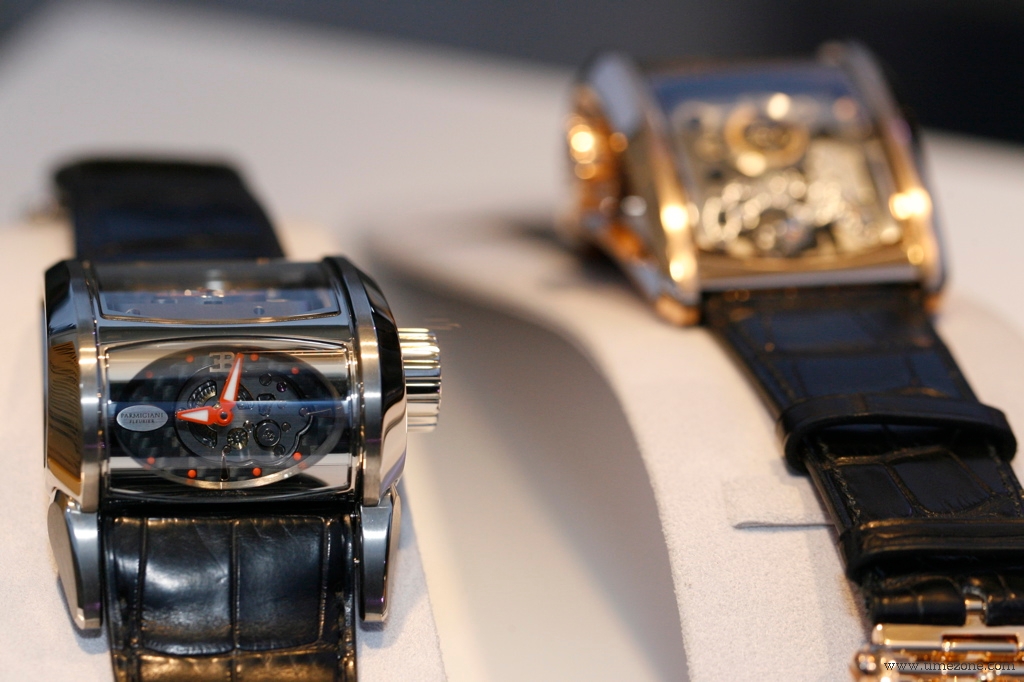 The Bugatti Super Sport released in 2010 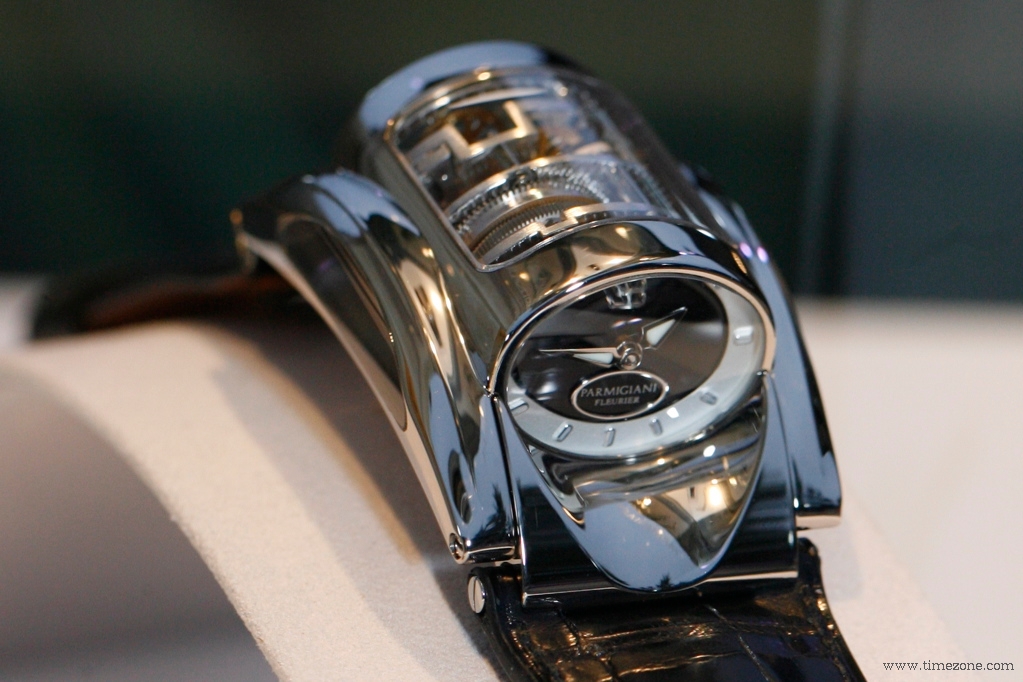 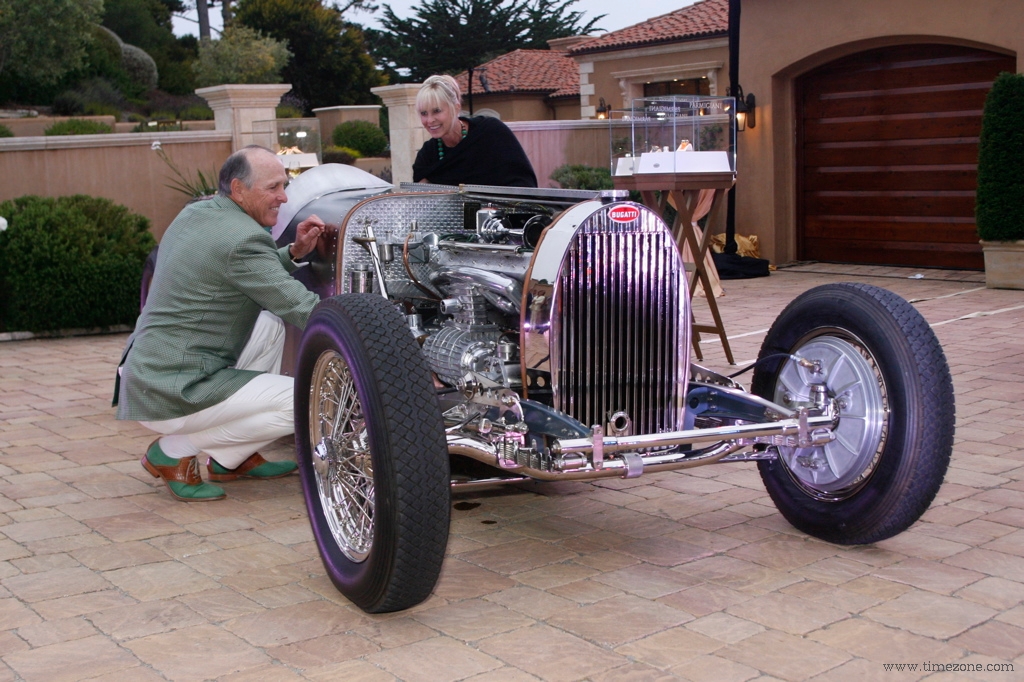 Jim Hull starts the ignition of his T57S Electron Torpedo 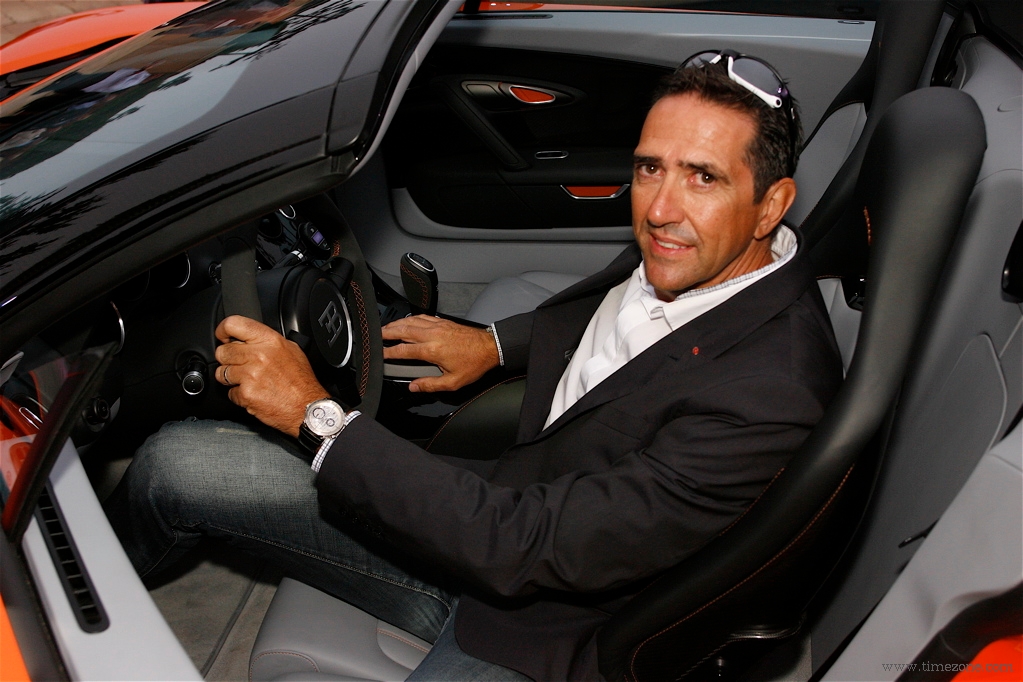 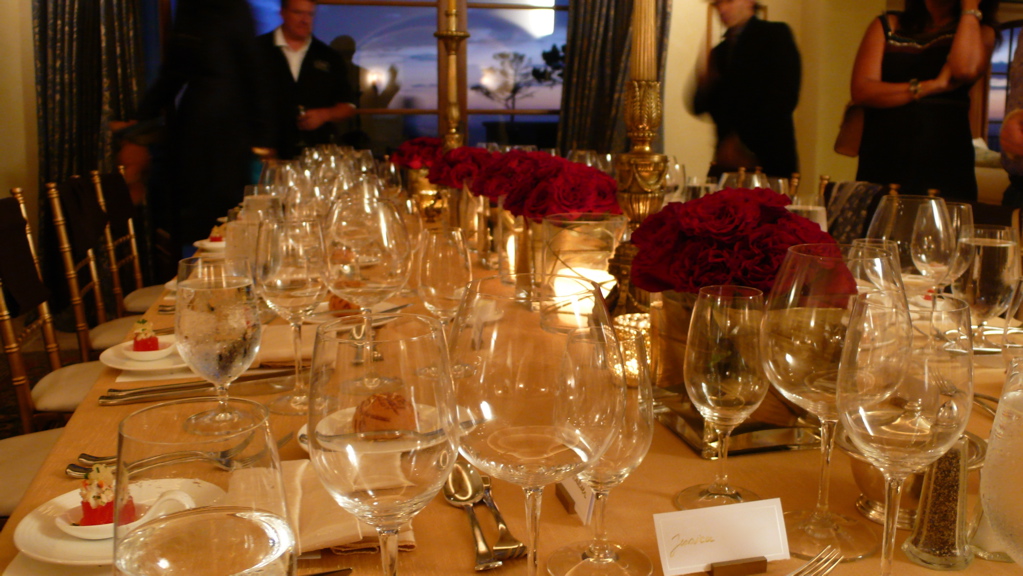 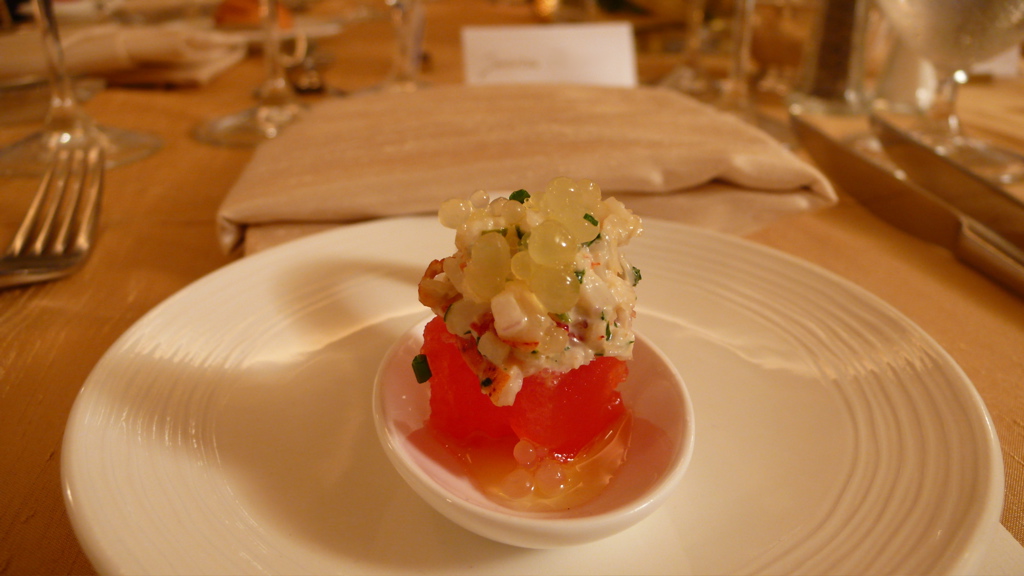